Unfazed by the rejection of his Bill, Sports Minister Ajay Maken said he would talk to his Cabinet colleagues to convince them but ruled out any dialogue with BCCI bigwigs. 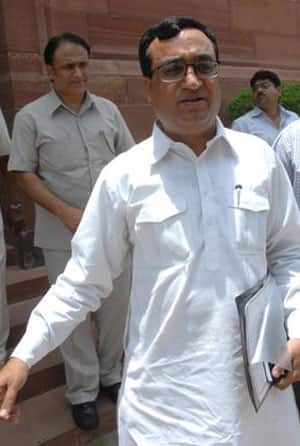 Unfazed by the rejection of his Bill, Sports Minister Ajay Maken said he would talk to his Cabinet colleagues to convince them but ruled out any dialogue with BCCI bigwigs.

Maken, who is keen to cleanse the system of managing the sports organisations by bringing in transparency and accountability, asserted that his attempt was to prevent any more scams like CWG.

In an interview to PTI, he rejected the contention of the opponents that he was bringing the National Sports Development Bill to ensure that government gets control of the sports bodies and expressed readiness to rework some of the clauses, except those linked to transparency and accountability.

“I am sure I will be able to reason out with people who are opposed (to the bill) because I am clear on one thing, we do not intend to control or be intrusive. We will discuss with them and we are willing to rework on any such provision which they feel government wants to control”, Maken said.

The Sports Bill was rejected by the Cabinet on Tuesday after several ministers, having interests in sports bodies, raised objections to many of the clauses, including cap on age and tenure restrictions. Maken was told to redraft the Bill.

Asked specifically if he was willing to talk to BCCI officials to find a way out, Maken said “BCCI has already being talked to by our committee, so I would be talking to my cabinet colleagues, I will try to convince them and discuss with them”.

On the strong opposition by some Union Ministers to some clauses of the Bill, Maken said he was “willing to have a re-look” without compromising aspects like efficiency and transparency by bringing sports bodies under purview of RTI.

The Sports Minister was peeved at the BCCI’s refusal to come under RTI, saying people of the country have a right to know how public money was being spent as the Cricket Board gets indirect government benefits like tax exemptions and land.

Insisting that BCCI cannot give the excuse of being an autonomous body to escape RTI scrutiny, he said the Cricket Board should consider itself a public authority under the RTI Act as it “directly or indirectly” benefits from the government.

“We are just saying that information regarding accounts and functioning of the organisation should be given to the citizens, particularly when you are sending Indian teams outside for tournaments,” Maken insisted and asked “what is the problem in giving information to the public?”

He said “the biggest public functioning” that BCCI was performing was sending Indian team, representing the nation, outside for tournaments.

Maken also said that land has been given by the government free of cost for all cricket stadia in the country.

“If you talk about resources or grants, there are some indirect benefits. For example, did the DDCA have to pay for the land for Ferozeshah Kotla Ground? Whenever matches are organised, they earn in crores (of rupees),” he said.

He said the Cricket Boards also avail of entertainment tax and custom duty exemptions, get income tax benefits and don’t pay for police security. “They get so much money from tax benefits which is just like a grant,” he contended.

Underlining the need for the Sports Development Bill, Maken said it was aimed at preventing scams like that occurred in Commonwealth Games.

“It is a step to reform entire sports. If this bill had been enacted earlier, the CWG scam would not have happened, because all these people who have been involved, none of them would have been office-bearer in their federations or IOA”, he said.

Maken also reckoned that corporates were ready to pump money into sports bodies but they were hesitant to do so because of absence of transparency about spendings.

“Corporate bodies are hesitant to put funds on sports because they do not know whether the money that they would invest, would be spent on sports persons or the sports administrators.

“That is why it is very important that there sould be trasparency in functioning. The administration should be streamlined and that is what we are trying to achieve”, he said.

Maken is also pushing for a 70-year cap on age of those heading sports bodies and a 12-year tenure besides 25 per cent reservation for sportspersons in the Executive Bodies.

The provisions with regard to age and tenure are in keeping with the International Olympic Council charter, he argued.

“The logic behind having 70 years age bar is that IOC itself has 70 years as age bar for its office bearers. Since IOC is the parent body of IOA, we have adopted it from them. Their own basic principles of good governance is 70 years of age limit and 12 years of tenure for pesident”, Maken explained.

“Secondly, we have also taken these two provisions from the 13th Olympic Congress in 2007 in Beijing where they adopted the Basic Principles of Good Governance (BUPOGG), the Sports Minister said.

Asked whether he was confident of getting the Bill cleared by the Cabinet second time round, Maken said his Ministry will fine-tune the provisions after discussions but did not give any timeline on that.

“We want sports bodies to be transparent in their function, accountable to the people of India through RTI, follow the basic principles of good governance. We have to make it clear that the government was not trying to control them,” he added.