BCCI may decide in its AGM to propose former president N Srinivasan as it's representative in ICC's powerful Board of Directors in place of Shashank Manohar.

New Delhi: In what could turn out to be a significant move, the BCCI may decide in its AGM to propose former president N Srinivasan as it’s representative in ICC’s powerful Board of Directors in place of Shashank Manohar. Incidentally it was Manohar who was made BCCI representative at ICC 10 months back. But since leaving BCCI to deal with Lodha crisis, Manohar has been at loggerheads with the BCCI on a host of issues with primary being abolition of lion’s share of ICC revenue along with England and Australia.

Also he tried to pressurise for two-tier Test structure and also wanted India to come into the common revenue pool. It has been learnt that on September 4, BCCI Secretary and Srinivasan’s one-time adversary Ajay Shirke met him in Chennai to discuss board’s current logjam with the Tamil Nadu strongman. With BCCI completely aggrieved with Manohar’s stand on Lodha Committee recommendations, the angry members may support the motion at AGM tomorrow. The BCCI, led by Anurag Thakur have also begun the screening process to pick Team India’s next selection panel. The selection committee led by Sandeep Patil recently announced the Indian squad for the Test series against New Zealand. 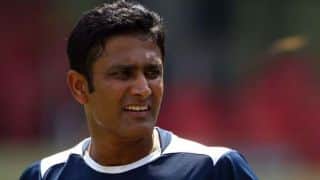