Deshpande has snapped 11 wickets in six matches of the T20 tournament so far.

Mumbai: Cricket has witnessed many stories of vigour and valour. Tuesday brought about yet another in Mumbai. Tushar Deshpande, the 23-year-old fast bowler, lost his mother, who passed away in the wee hours of the morning at Fortis Hospital at Mulund after a two-year battle with ovarian cancer.

Few would expect to report to work, but Deshpande, the only child of the family, has made up his mind to travel with the Mumbai squad on Wednesday for the Syed Mushtaq Ali trophy knockouts to Indore where they will be up against Karnataka at the Holkar Stadium. The match gets underway on March 8.

She was unable to cope up with the chemotherapy. She had already undergone 24 chemotherapy sessions and it was not agreeing with her. I was very attached to her like every son would be. For the last month, she was not talking at all. Having a mother is the biggest gift, whether she talks or not, Deshpande told CricketCountry on Tuesday. (ALSO READ: Inspired by Dale Steyn, Tushar Deshpande cracks his no-ball conundrum)

Asked about his brave decision to take the field for Mumbai, Deshpande, who has snapped 11 wickets in the six matches of the T20 tournament so far, explained: Thoughts about mummy will definitely come, but my mom wanted me to play well and nothing else. If I stop right now, then there s no point.

The Kalyan resident has had to endure many challenges in the recent past. Deshpande had a great Vijay Hazare Trophy after which he performed well for Mumbai in the Ranji Trophy 2018-19 opening match against Railways at the Karnail Stadium where he picked up six wickets in the first innings. His performance caught the eye of the national selectors and he was a hot contender for a spot in the India A side, besides also a place in the Indian Premier League (IPL) auctions in December.

However, all that faded away after he picked up an injury in a local club match and he was sidelined for about a month. I was in good form, but that injury really hurt me. Mentally, I knew I was in good touch, I got good confidence from the Vijay Hazare Trophy and I just wanted to carry it further. I was mentally strong that I will make a good comeback, Deshpande said.

Mumbai have finally managed to make it to the knockouts, something that eluded them in the Ranji Trophy season and Deshpande attributed his team s ascent to their ability of withstanding pressure and picking up wickets in the T20 format. We are picking up wickets. If you look, except for Goa, we have bowled out all the other teams we have played. We have been handling pressure really well and we re not panicking. Another plus point is Ajinkya Rahane, an international captain, so all this do make a difference, he said. 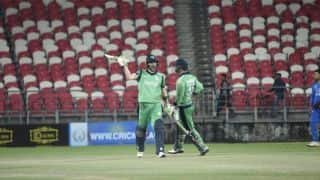