In a must win game India women opted to field first against Australia women in the 4th T20I of tri-series.

Meg Lanning had mentioned how a big partnership would be fruitful for Australia Women during the toss of the 4th T20I. A huge partnership between Beth Mooney and Elyse Villani did work in advantage of Australia who posted a challenging total of 186 for 5 on board at Brabourne Stadium in Mumbai. After the openers Ashleigh Gardener and Alyssa Healy failed to convert their starts, Mooney and Villani held the innings with their respective fifties. Once the batswomen fell in quest for quick runs, Lanning and Haynes’ cameos ensured Australia held the momentum. Pooja Vastrakar provided the early blows, while the spinners tried to halt Australia’s success towards the fag end.

Opting to field in a must-win game, India looked out of sorts on the field. Healy and Gardner who looked dangerous with the boundaries flowing almost after every ball were sent back to the hut as Vastrakar held her nerves. She bowled a brilliant yorker uprooting the middle and leg stumps.

However, Mooney (71) and Villani(61) held fort. They stitched a partnership of 114 runs for the fourth wicket. India with their ordinary fielding effort made the task easier for Australia. The batters looked exhausted in the middle as Villani hit a tired shot off Poonam straight to Jemimah Rodrigues in the 16th over.

The Indian Eves managed to pick wickets when the half of the work was done by the Mooney and Villani. Lanning during her unbeaten 10-ball 11 knock, played second fiddle during her 30-run stand with Mooney. Once Mooney fell, Lanning added the finishing touch with Haynes who remained unbeaten on 10. 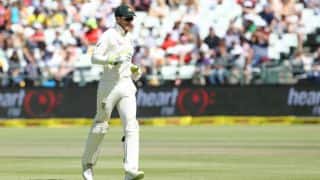 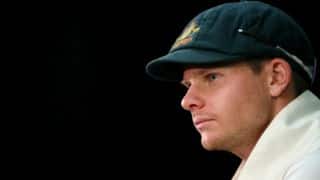 Ball-tampering row: Steven Smith not on plane to Australia contrary to reports