Damien Fleming reckons that Bhuvneshwar Kumar and James Anderson are the two best swing bowlers in the world currently.

“I love watching Bhuvi Kumar because, probably with James Anderson, they are the best swing bowlers in the world,” Fleming told Sydney Morning Herald. “He actually has the skills where he can bowl outswingers and inswingers to right and left-handed batsmen.”

Bhuvneshwar has added some pace in recent times without compromising on swing and recently told Cricketcountry how he was close to finding the perfect balance between the two traits of fast bowling.

“When he (Bhuvi) first started, he lacked a yard or two in Test cricket, but he has increased his pace a little bit in the past two years,” Fleming observed.

India’s pace attack has drawn a lot of praise for their recent performances in overseas conditions where they have not only matched their counterparts but also outpaced them on occasions.

The world’s top-ranked Test team will next face Australia in a four-Test series in December. Indian pace attack will be led by the likes of Ishant Sharma, Bhuvneshwar, Jasprit Bumrah, Mohammed Shami and Umesh Yadav. “That’s as impressive a pace attack that I have ever seen India bring out to Australia. They are actually quite experienced now, too. They will have two unlucky quicks. It’s a real luxury. That’s good for them,” he said.

He also pointed out that Bumrah, with his unique action, will be the X-factor. “He (Bumrah) is the real X-factor – 28 wickets in six Tests. I have seen him in the IPL. He has that unorthodox action, a stuttery run-up, a weird run-up but I think for batsmen you don’t get a real good sight of the ball but he has got pace and bounce and has a great yorker that I think he will utilise particularly against the tail,” he said. 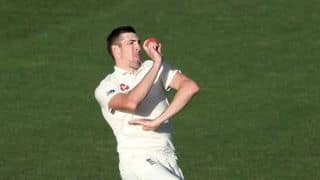