Stars were put in to bat and were off to a solid start with their openers Stoinis and Ben Dunk combining for a 63-run partnership. Ben Cutting (2/10) gave Heat the first breakthrough when he pinned Stoinis in front in the ninth over.

Mitchell Swepson (2/26) had Dunk hole to Alex Ross for 24 off 26 in the following over. Stars didn’t recover from the twin blows. Captain Glenn Maxwell (3) and Peter Handscomb (6) fell to Brendan Doggett (2/30) in his successive overs.

Nic Maddinson (18) and allrounder Dwayne bravo (17) played handy innings to give the final total some decency.

Max Bryant and Brendon McCullum led a bright start adding 31 runs before the former was dismissed by Stoinis with the final delivery of fourth over. Chris Lynn then fell for a four-ball duck to legspinner Adam Zampa with the scorecard stationary at 31.

Matt Renshaw and Jimmy Peirson joined hands to start the repair work. They brought the chase back on track taking the score to 111/4 when Stoinis struck again and this time he had the well-set Renshaw out for 43-ball 45 in the 17th over.

Stoinis then also accounted for Pierson (26) and Cutting (6) as Stars came back in the death overs, picking regular wickets edge past their opponents. 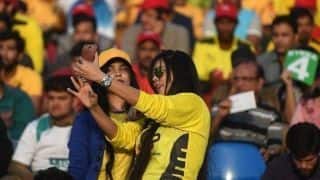