Hello and welcome to CricketCountry’s coverage of Karnataka Premier League (KPL) 2015. Today, in the match 26 of KPL 2015, Bijapur Bulls are taking on Belagavi Panthers at the Srikantadatta Narasimha Raja Wadeyar Ground, Mysore. Both teams have played six games each— Bijapur Bulls have won five whereas Belagavi Panthers have won four. Both the teams will strive to win this match as it is a very important game for them.  Karnataka Premier League (KPL) 2015 Points Table

Belagavi Panthers 121/3 Live Cricket Score | Overs 16.3, BATTING: R Vinay Kumar 60(49), Rongsen Jonathan 6(9): And skipper Vinay Kumar seals the match for his side with a massive six over the cow corner, remaining unbeaten on 60 off 49 balls in the process. The Bijapur Bulls’ unbeaten run comes to an end in what turned out to be a one-sided contest, with Vinay Kumar and Hoover taking the momentum away from them following the early wicket with a 71-run partnership. OUT! A Majid st Uthappa c Ragavendra 4(7)

Belagavi Panthers 85/2 Live Cricket Score | Overs 10, BATTING: R Vinay Kumar 34(27), A Majid 0(0): Vinay Kumar and Stalin smash their way towards the target, collecting 20 runs in the ninth over to reduce the equation to an easy 39 needed from 66 balls. Stalin however, falls short of a half-century when Samarth takes a fantastic running catch at long-off following an ambitious heave. The Panthers are still in command though, especially with Vinay Kumar at the crease. OUT! Stalin Hoover c Samarth b Cariappa 41(27)

Belagavi Panthers 42/1 Live Cricket Score | Overs 5, BATTING: R Vinay Kumar 17(10), Stalin Hoover 16(14): The Panthers are off to a good start in their chase of the modest 119-run target, with the Bijapur Bulls facing the threat of losing for the first time in the ongoing series. The Panthers lose the wicket of Reddy early in the innings, but skipper R Vinay Kumar begins his onslaught of the Bulls attack to bring the momentum back in Belagavi’s favour. OUT! Abhishek Reddy c Ragavendra b Somanna 5(6)

Bijapur Bulls 118/8 Live Cricket Score | Overs 20, BATTING: Nidesh 24 (23), Cariappa 0 (0): Nidesh steers a ball towards on for a single. Vyshak pulls a ball but has to settle for a single only. Nidesh plays a straight drive, again only one run fetched. Vinay is bowling well but he needs to pick wickets. Vyshak hits Dubey down the ground for a four. Bulls need some big hits. Batsmen are trying to hit but they are not getting runs. After 18 overs 98/7. Nidesh and Vyshak have steadied the ship somewhat. Nidesh’s bat broken while he tries to play a slog shot. He takes a new bat and hits a four towards off on the very next ball. Vyshak tries playing a cheeky scoop but misses it but still he takes a run on the bye. Third-umpire called for a run-out decision, Vyshak is safe. Vyshak hits a four and follows it up with a single. Bulls have reached a respectable total but not a good total. Vyshak is caught by the keepr. Bulls innings folds at 118-8. They need to get their act together to win this match since they have posted a small total.

Out! Vyshak c Chiranjeevi b Sharath

Bijapur Bulls 83/7 Live Cricket Score  | Overs 16, BATTING: Nidesh 5 (9), Vyshak 7 (10): Somanna hits a lofted shot and is caught in the deep.  Bulls are in trouble. Sharath comes to bat. Bharath bowls some deliveries outside off. Another wicket. Bharath clean bowls Sunil Raju. He totally missed his tossed up delivery. Bulls are 77-6 and things look difficult for them. They might get bowled out. Bulls lose another wicket. Zeeshan Ali takes a good catch on his own bowling. Bijapur Bull’s innings may fold up within 100 runs. Nidesh and Vyshak have a tough job ahead, they need to take Bulls to at least 100 or at least a respectable total. But they are not able to middle the ball, it looks like it’s all over for Bulls. Nidesh takes a single– one through the long off area and other through the mid-wicket. Panthers are bowling in right areas. Vyshak takes another single towards fine-leg.

Bijapur Bulls 69/4 Live Cricket Score   | Overs 12, BATTING: Somanna 21 (24), Raju 2 (4): Hoover is bowling the 10th over. Uthappa is run out. Chougule comes to the middle. Somanna is looking to convert singles into doubles. Vinu Prasad handed the ball. Somanna tries a reverse sweep with no favourable result. Chougule tries playing a scoop shot and edges it to the wicketkeeper. Sharath bowls a bouncer to new batsman Sunil Raju, no run. He is finally able to take a single of Sharath in the third ball of the 12th over.

Bijapur Bulls 49/2 Live Cricket Score | Overs 8, BATTING: Somanna 7 (13), Robin Uthappa 9 (11): Stalin Hoover is given the ball; keeper Chiranjeevi takes a brilliant catch to dismiss Samarth. Hoover is bowling tight. Just five runs come from Hoover’s over and a wicket. Praveen Dubey bowls the sixth over. Somanna tries to sweep, ball takes upper edge of bat and lands in no man’s land. The batsmen are dealing with singles and doubles; looks they dont want to take risk as of now. The batsmen are running dangerously, a direct hit and Somanna would had been history. Somanna is swimming in troubled waters. Spinner Dubey flights his first ball and Robin Uthappa plays inside-out for a single. Somanna is also dealing in singles.

Bijapur Bulls 28/1 Live Cricket Score | Overs 4, BATTING: Ravikumar Samarth 19 (17), Robin Uthappa 1 (2):  Nice delivery from Vinay Kumar and there is a loud shout for LBW on the very first ball of the match. Umpire gives not-out. Samarth times a ball on the off-side for a brilliant four; he places the ball neatly between two players. Its 4-0 in the first over. Medium-pacer Sharath comes to bowl the second over. Another four on the off-side, very similar to the first four— in the gap. A better fielding effort needed at backward point. Samarth hits his third four, this time towards third man and follows it up with a four on square leg. He looks in good touch. Bhatkal takes a quick single on the first ball of the third over. Samarth tries a cover drive but finds the fielder. Samarth takes a single of a hook shot. Bhatkal comes to party. He hits a six through the famous upper-cut shot; although he is not able to time it perfectly still it fetches him six runs. Bhatkal then drags the next ball on to his stumps. Destructive batsman Robin Uthappa comes to bat. He defends the first ball before taking a single.

Toss: Belagavi Panthers have won the toss and have decided to bowl first 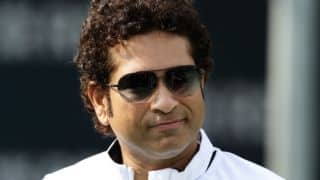