Birth certificates have 'no bar' at World Cup

Birth certificates have 'no bar' at World Cup

Australians playing for Ireland, South Africans turning out for the Netherlands, Indians and Pakistanis in the Canadian team. A birth certificate is no bar at the World Cup 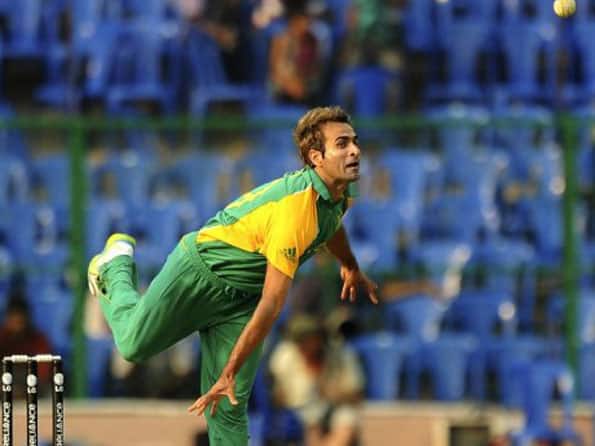 It is not just the so-called minnows who include players from overseas — England have a clutch of South Africans and South Africa themselves include Pakistan-born Imran Tahir (pictured) in their squad.

Australians playing for Ireland, South Africans turning out for the Netherlands, Indians and Pakistanis in the Canadian team. A birth certificate is no bar at the World Cup. But it is not just the so-called minnows who include players from overseas — England have a clutch of South Africans and South Africa themselves include Pakistan-born Imran Tahir in their squad.

Fellow International Cricket Council associate member Ireland look to players from South Africa, New Zealand and Australia, although the bulk of their squad are home-grown.

England have faced flak for recruiting South Africans including key players Kevin Pietersen and Jonathan Trott. Matt Prior was born in Johannesburg and even skipper Andrew Strauss has a South Africa birth certificate.

But far from being a source of embarrassment for the Canadians, the multicultural make-up of their squad is a matter of pride. Canada’s minister of citizenship, immigration and multiculturalism Jason Kenney last week said he hoped the “Canadian Tendulkar” would be found among a wave of recent immigrants, many from “great cricket-playing nations.”

Ireland caused one one of the biggest upsets in World Cup history when they beat Pakistan in the West Indies in 2007, with Australian-born skipper Trent Johnston hitting the winning runs.

Johnston began his career at New South Wales where he played alongside the likes of Australian Test stars Mark Taylor, Michael Slater and Brett Lee.

Cricket Ireland media manager Barry Chambers told AFP that foreign players had boosted the quality of cricket. Ireland had only picked players born elsewhere if they were resident in Ireland and had shown a commitment to Irish cricket, he said. Johnston, for example, is married to an Irish woman and lives in Dublin.

“In Ireland’s case, the players have helped to take Irish cricket to a new level. We’re now the leading associate and have qualified for the final stages of four major ICC events. The players brought a professionalism to the game which has rubbed off on the younger players coming through. Ireland keep producing real gems — Eoin Morgan before he switched to England,” he said.

But Chambers said some teams “take it to extremes”, without spelling out which ones he was referring to, adding: “I’d have no problem if the ICC decided to put a cap on players born outside the country to three or four. We took a lot of criticism during the last World Cup from particularly the English media for the number of non-nationals. It’ll be interesting to see when we play them in Bangalore just how we compare to them in terms of people born in their respective countries.”

Irishman Ed Joyce is in the unusual position of turning out for Ireland at the World Cup having already represented England.

Netherlands team manager Ed van Nierop said players from overseas had lifted the standard of cricket “enormously” in the European nation with the aim being to establish a long-lasting relationship.

The team includes stars such as South African-born Ryan ten Doeschate, who averages an eye-watering 68.55 in one-day internationals, the highest ODI average in the world. Skipper Peter Borren played on the New Zealand under-19 team with current Black Caps stars Ross Taylor and Jesse Ryder.

“The selectors tend to want foreign passport holders to link up with Dutch cricket, not simply fly them into the squad for big tournaments,” said van Nierop.

“Ryan ten Doeschate has a history in the country playing for a club called Bloemendaal for a season. Also, Tom Cooper (born in Australia) played for VRA Amsterdam last summer. Our selectors do look at Dutch passport holders in Test-playing countries,” said van Nierop. “But it’s a balance and we do try to get them involved in the Dutch cricket set-up as much as possible beforehand.

“The one exception was when (fast bowler) Dirk Nannes (the son of Dutch parents who subsequently represented his native Australia) became available for the 2009 World Twenty20. That was a gift horse we couldn’t overlook.”