Pakistan put up 167/3 in the first innings. For Bangladesh, Jahanara Alam was the pick of the bowlers, finishing with figures of 2/27.

Skipper Bismah Maroof and opener Javeria Khan slammed fifties while Sadia Iqbal struck thrice within the space of two overs to help Pakistan women beat Bangladesh Women by 15 runs and win in the second T20I at the Gaddafi Stadium in Lahore on Monday.

Pakistan got off to a steady start, after being put in to bat. Openers Javeria and Sidra Ameen put on 35 for the first wicket, before the latter’s innings was cut short by Lata Mondal for 19.

Maroof then added 95 runs from 71 balls for the second wicket with Javeria to set up a strong finish.

Pakistan put up 167/3 in the first innings. For Bangladesh, Jahanara Alam was the pick of the bowlers, finishing with figures of 2/27.

The visitors could never keep up with the chase despite late heroics from Jahanara who smashed an unbeaten 18 off five balls, including two sixes and a four in the finishing stages as they managed 52/7. Iqbal finished with 3/19 from her four overs. 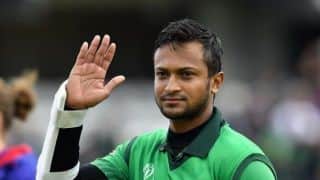