Pakistan bowlers were right on money from the onset. They put up a much better show from the previous game, where their morale got a thrashing at the hands of Indian batsmen.

Pakistan witnessed a remarkable turnaround in fortunes against South Africa in the rain-affected Group B fixture of ICC Champions Trophy 2017. They edged past South Africa by 19 runs (DLS method), at Edgbaston on Wednesday. Chasing 220 to win, Pakistan had reached 119 for 3 after 27 overs when rain interrupted the match. Babar Azam 31* (51) and Shoaib Malik 16(14)* were going strong. At this point, Pakistan were ahead of South Africa by 19 runs on DLS par score. The chief architects of their win were their bowlers Hasan Ali and Imad Wasim, who bowled exceptionally well and returned with 3 and 2 wickets respectively at a miserly rate. For South Africa, David Miller with and Morne Morkel excelled with the bat and ball respectively. Full Cricket Scorecard: Pakistan vs South Africa, ICC Champions Trophy 2017

220 was always going to be a tricky total, considering the unpredictability of mercurial Pakistan s batting. Moreover, there was always a chance of rain interrupting the second half, which meant Pakistan had to be cautious to stay ahead on DLS par score. In a nutshell, Pakistan needed to start strong. They had a new pair today, with Ahmed Shehzad making way for Fakhar Zaman.

The left-handed Zaman, who reminded of a certain Aamer Sohail with his unusually high backlift, started off on a positive note, hitting the second ball he faced for a four. Zaman was severe against the pace duo of Wayne Parnell and Kagiso Rabada, scoring runs in boundaries. His cuts, drives and a lofted shot over mid-wicket for a four were a treat to watch.

But just when it looked like Zaman will run away with it, Morkel got rid of him in his second over. After bowling a short ball, Morkel deceived Zaman with an off-cutter, and the batsman edged it to the slip. He scored 31 off 23 including 6 fours. In the same over, Morkel sent back the other opener Azhar Ali, who fell trying to upper-cut a short ball on the off-stump for a six, only to find Imran Tahir at third man.

After losing two wickets in an over, Pakistan batsmen went in a shell and the scoring rate fell drastically. Babar and Hafeez played cautiously, depriving South Africa of any other wicket which would have put them ahead on DLS par score. Both Babar and Hafeez added a careful 51 runs for the third wicket, before Morkel returned to remove Hafeez for 26.

Babar and Malik then added 26 runs for the unbroken stand before rain intervened and halted the play for good. Umpires waited for a long time before calling off the game and declaring Pakistan winners (DLS method).

Earlier, AB de Villiers won the toss and opted to bat first. However, a much improved showing by the Pakistan bowling unit saw South Africa being restricted to 219 for 8. In a do-or-die encounter, Pakistan bowlers came out all guns blazing, striking at regular intervals and stopping South Africa at a modest total. Speedster Hasan was the pick of the bowlers, with his three-wicket haul. Junaid Khan and Imad were also impressive, with the latter returning with figures of 2 for 20 from his 8 overs and not conceding a single boundary.

For South Africa, only Miller stood tall, scoring a fine 75 not out to take his team to a fighting total on a tricky wicket. Miller was the reason South Africa could cross the 200-run mark after being 118 for 6 at one stage.

The highlights of South Africa s innings were skipper de Villiers going for a golden duck first of his ODI career. Hasan bowled peach of deliveries to take wickets of JP Duminy and Parnell on successive balls and Miller s key partnerships with Chris Morris (28) and Rabada (26) to take the total beyond 200.

Pakistan bowlers were right on money from the onset. They put up a much better show from the previous game, where their morale got a thrashing at the hands of Indian batsmen. Their pacers used conventional swing and reverse swing to good effect to test the South Africans. The batsmen then took confidence from bowlers good work to script a much-needed win and keep the team alive in the tournament. 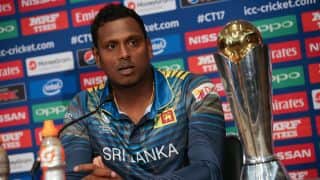 Angelo Mathews: Sri Lanka happy to walk in as underdogs against India 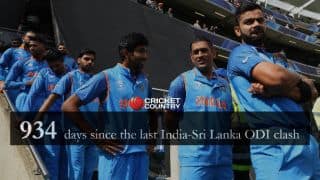