Rankin has taken 308 wickets in 92 First-Class matches and played in the final Test for England against Australia in the 2013-14 Ashes.

Ireland paceman Boyd Rankin will miss the rest of the season after breaking his leg, it was announced Tuesday. The 32-year-old fractured his left tibia during a training session with English county side Warwickshire. Rankin has now been ruled out of Ireland’s two One-Day Internationals against Pakistan in Malahide, near Dublin, this week as well as the ICC InterContinental Cup and T20 matches against Hong Kong and next month’s ODIs against South Africa and Australia.

“It’s obviously a blow to lose a bowler of Boyd’s quality and experience at such a crucial juncture of the season, but these things happen in sport and we wish Boyd a speedy recovery,” said Ireland coach John Bracewell in a Cricket Ireland statement.

Bracewell added Ireland would not bring a replacement for Rankin into the squad for the matches against Pakistan on Thursday and Saturday as they felt they already had sufficient seam bowling options.

Rankin has taken 308 wickets in 92 First-Class matches and played in the final Test for England against Australia in the 2013-14 Ashes series in Sydney before reverting back to representing Ireland.

“It’s extremely frustrating to lose Boyd during such a key point in the season,” Warwickshire director of cricket Dougie Brown told the club’s website. “He will now go through a rehabilitation programme with our medical team.” 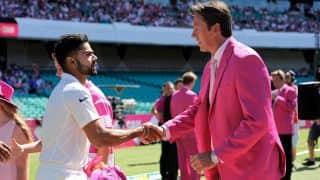