New Zealand skipper Brendon McCullum became the second batsman from his country to complete 6,000 Test runs during the second Test against England at Headingley on Sunday. McCullum brought up his half-century off the very next ball, as New Zealand reached a score of 247 for four after 55 overs, with a lead of as many runs. McCullum was eventually dismissed for a score of 55 off 98 deliveries, as New Zealand lost their fifth wicket with 262 on board. Live Updates: England vs New Zealand, 2nd Test, Day 3 at Headingley

Following is the list of the highest career run-getters for New Zealand in Tests, with former skipper Stephen Fleming at the top of the table with 7,172 runs:

McCullum’s presence at the crease will be crucial if New Zealand are to set a competitive target for England and keep their hopes of a series win alive. After bowling New Zealand out for 350, England were firmly on top as openers Adam Lyth and Alastair Cook scored 107 and 75 respectively, adding 177 runs for the first wicket. Once Cook and Lyth departed, the hosts began to lose wickets at an alarming rate, collapsing to 267 for eight from 215 for one.  Live Scorecard: England vs New Zealand, 2nd Test, Day 3 at Headingley

Some brave hitting by Stuart Broad in the lower-order guided England to 350. New Zealand, in response, lost the early wickets of Tom Latham (three) and Kane Williamson (six), with the scoreboard reading 23 for two. Martin Guptill (70) and Ross Taylor (48), then rescued New Zealand. McCullum then combined forces with BJ Watling (70) to further consolidate the Black Caps. 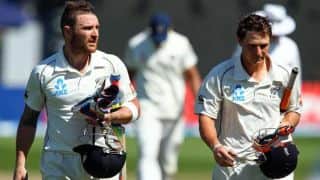 Brendon McCullum, BJ Watling score fifties to put New Zealand back on track against England in 2nd Test at Headingley 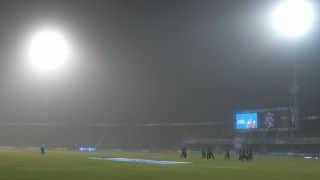