Brendon McCullum is only the sixth player to score a double ton in back-to-back Tests.

Brendon McCullum has scored double centuries in consecutive Test matches against India. He scored 224 runs in the first Test in Auckland and has followed that with another double ton in the second Test in Wellington on February 17, 2014.

Below is a table showing the list of batsmen who have scored double centuries in consecutive Test matches. Only their double century scores are listed in chronological order and against which opposition they scored.

* Updated when McCullum was batting on 204. 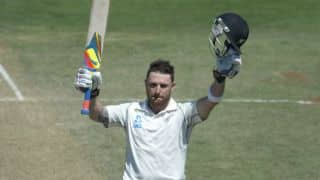