London: Brendon McCullum said Monday he stood by the evidence he gave against New Zealand great Chris Cairns as he urged the International Cricket Council (ICC) to be more “professional” in dealing with players alleging match-fixing. Former New Zealand captain McCullum, delivering the MCC Spirit of Cricket Cowdrey Lecture at Lord’s, also questioned whether handing out life bans to players such as former team-mate Lou Vincent, who acknowledged their wrongdoing, would encourage others to come forward. McCullum, then still an active international cricketer, gave evidence against Cairns in a perjury trial in London, which ended with the acquittal of the former all-rounder in November last year. READ: Brendon McCullum to deliver MCC Spirit of Cricket Cowdrey Lecture at Lord’s

Charges were brought against Cairns after he sued Indian Premier League (IPL) chairman Lalit Modi for libel in 2012 over a 2010 tweet in which the administrator accused him of match-fixing. McCullum, as he had done in court, said “former hero” Cairns had approached him to fix matches – allegations Cairns denies.

“I think it is appropriate, standing here at ‘the Home of Cricket’ [Lord’s], to confirm that I stand by everything said in my statements and the evidence I gave at Southwark Crown Court,” McCullum, 34, said. Players are told that failure to report an approach is almost as serious as any offence itself. READ: Brendon McCullum: AB de Villiers’ presence will boost CPL 2016

McCullum added he did not report Cairns’s approach until 2011 because he felt “scared”, and was later taken back by the “very casual” manner in which his allegations were noted, but not recorded, by a member of the ICC’s anti-corruption and security unit (ACSU).

McCullum then made two more statements, another to the ACSU and to London’s Metropolitan Police. Recalling he was “hammered” by Cairns’ lawyer for making three statements, McCullum said someone at the ICC should have realised his evidence might one day be used in court.

“I think players deserve better from the ICC and that, in the future, the evidence gathering exercise has to be much more thorough, more professional. In my opinion a person taking a statement should ensure that the witness is advised about what may occur.”

McCullum’s evidence was then leaked to Britain’s Daily Mail newspaper. “How can the game’s governing body expect players to co-operate with it when it is then responsible for leaking confidential statements to the media?,” he said Monday.

Vincent, who also gave evidence against Cairns, was banned from cricket for life in 2014 after he admitted his involvement in spot-fixing–where players deliberately under-perform to help stage a betting coup. “Perhaps the worst part is that Lou is unable to go to a cricket ground anywhere in the world,” said McCullum. “He can never watch his children play at any level. I struggle with the severity of this when a player has cooperated fully and accepted responsibility. READ: Chris Carins match-fixing row: Brendon McCullum stands by his testimony

“It is vital that players found guilty of offences having acknowledged wrongdoing are shown a degree of clemency – failing which there seems to be very little incentive for them to come forward.”

McCullum led New Zealand to the final of last year’s World Cup and bowed out of international cricket by scoring the fastest-ever Test hundred, off just 54 balls, against Australia at Christchurch in February. He was also praised for the sporting way in which he captained New Zealand, with the team abandoning “sledging” — verbal abuse of opponents — under his leadership.

“In changing the way we approached the game, and respected the opposition, we wanted to be true to our national identity,” McCullum said. “In terms of that, New Zealanders identify with strong silent types. “Perhaps our greatest hero is Sir Edmund Hilary – the first person to climb Mount Everest…He never spoke boastfully about his remarkable achievements. READ: Chris Cairns questions Brendon McCullum after clearing perjury trial

“We wanted to be a team that people could be proud of; and if in doubt we wanted to play the game aggressively, not fear failure. I have been given too much credit for what we achieved…Everyone brought into it and lived it and breathed it.” 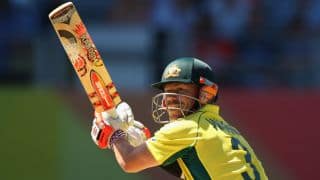 Rohit Sharma: Virat Kohli has lot of belief in himself and his abilities