New Zealand lead India by 194 runs at tea on Day Four of the second Test.

Brendon McCullum and BJ Watling created numerous records in their marathon partnership as they guided New Zealand to 440 for five at tea on Day Four of the second Test against India. McCullum is batting on 228 and Watling is on 119 in Wellington on February 17, 2014. New Zealand lead India by 194 runs in their second innings.

McCullum and Watling also recorded the highest partnership for New Zealand against India in Test cricket. Their stand is currently worth 346 runs off 724 deliveries for the sixth wicket. A total of 93 runs were scored in the session.

The second session started with New Zealand at 347 for five. McCullum cut a short delivery from Ravindra Jadeja for a four behind square on the off side. Watling got three runs through cover with a drive to a delivery from Mohammed Shami.

McCullum then hit a full and wide delivery from Zaheer for a four through cover to get to 199. He got to his double century with a flick for four towards mid-wicket. McCullum got to many milestones en route to his double ton.

He became the sixth player in history to score double centuries in consecutive Tests. He scored 224 runs in the first Test against India in Auckland. This is also McCullum’s third double ton and all three have come against India.

After scoring his double century, McCullum played an upper cut to a hsort delivery from Ishant and got a six over third-man.

MS Dhoni then made Rohit Sharma and Virat Kohli bowl in order to try something different and hope for a breakthrough. McCullum guided a back of a length delivery from Kohli towards third-man for a four. He then pushed one behind point for two runs and crossed his highest Test score of 225.

Tea was soon called by the umpires as New Zealand led by a healthy 194-run margin. 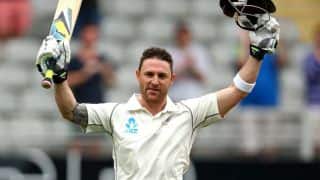