New Zealand are at 347 for five at lunch in their second innings against India.

Brendon McCullum and BJ Watling have tormented India as they have taken New Zealand‘s lead to 101 runs at stumps on Day Four of the second Test. New Zealand are at 347 for five in their second innings with McCullum batting on 169 and Watling on 90. Their stand is worth 253 runs off 538 deliveries. The Indian bowlers had to toil hard in the morning session.

The day started with New Zealand at 252 for five. Watling began the scoring with a push towards covers for three runs. McCullum then drove a Ishant Sharma delivery in the air through cover for a four.

Zaheer Khan bowled two knuckle balls in-a-row, but both were low full-tosses. The first was pushed for three by McCullum towards covers and the next was hit through cover again by Watling for a four. McCullum then edged one from Zaheer for three runs towards third-man.

Mohammed Shami then strayed down the leg side and Watling flicked it away for a four behind square on the leg side. Watling then edged a Shami delivery for a four through third-man. McCullum then cut a short and wide delivery from Ishant through cover for a four to bring up the 200-run partnership with Watling.

McCullum then played a late cut to a back of a length delivery from Zaheer for a four through third-man. There were a couple of shouts for LBWs against McCullum from Ishant and Shami, but the deliveries would have missed the stumps.

Zaheer then bowled one wide of off-stump and McCullum struck that through cover for a four to bring up his 150. He then flayed a back of a length delivery over gully for another four.

Ravindra Jadeja bowled a length delivery outside off-stump and Watling played that away for a four through third-man. Zaheer then got a thick edge off McCullum’s bat, but Shikhar Dhawan at wide first slip could not hold onto it diving low to his right. The ball raced away for a four.

Watling then swept a delivery from Jadeja for a four towards fine-leg. Ishant then started bowling from round the wicket to McCullum with seven fielders on the off side. But McCullum was not to stay quiet for long and cut a short and wide delivery in the air for a four towards cover-point.

Ishant then drifted on the pads and Watling flicked it away for a four towards fine-leg. That brought up the 90 for Watling and got New Zealand’s lead to 100 runs. It also brought up the 250-run partnership between McCullum and Watling. Lunch was soon called by the umpires as New Zealand moved closer to safety in the Test match. 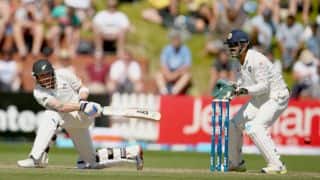 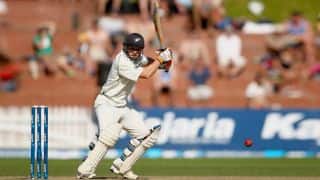