Former Australian speedster Brett Lee was a sensation to watch on the field during his heydays.

Cricketer and film industry share an old bond, stars from across the fraternity are often seen interacting with each other. Former Australian speedster Brett Lee was a sensation to watch on the field during his heydays and the menacing right-arm pacer is replicating similar magic post-retirement in the field of acting. Lee’s love for India is widely reckoned, in the past, he also recorded a music video with renowned Indian singer Asha Bhosle, which made rounds in the industry. Lee’s romantic comedy called ‘UnIndian’ is an Australian film, which was released in his home country in October 7, 2015. The film has now hit the Indian theatres on August 19 and as a part of promotions, Lee was spotted in widely known ‘The Kapil Sharma Show.’ ALSO READ: Dwayne Bravo to appear in The Kapil Sharma Show

The film has Lee and Tanishtha Chaterjee in the lead and has been directed by Anupam Sharma. Gulshan Grover and Supriya Pathak will also be spotted playing important roles in the film. Lee had a good time at the show and the moment was overwhelming for most of the cricket fans. ALSO READ: Chris Gayle shoots for The Kapil Sharma Show along with Mika Singh, Kanika Kapoor

Lee is playing the role of a teacher in the movie who spreads knowledge about the Australian culture. During the show, he spoke in Hindi and seemed to have mastered the art as he famously did it on the field. Lee also answers couple of questions in Hindi and the audience simply loved it. Earlier, cricketers like Dwayne Bravo, Chris Gayle, Virat Kohli and many others too marked their presence at the show. 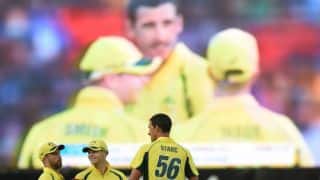