The success of Bumrah and Bhuvneshwar has made it it tough for India to give other Indian quicks many chances, the skipper says.

India s captain Virat Kohli has lauded the success of Bhuvneshwar Kumar and Jasprit Bumrah as a new-ball pair in limited-overs cricket, while considering himself lucky to be able to call on their skills, but also admits that this has limited the chances of other fast bowlers getting opportunities.

Kohli has reportedly spoken about resting Bumrah and Bhuvneshwar during the IPL to keep them in top shape for the 2019 ICC Cricket World Cup in England, but a day before the start of the T20Is series with Australia in Brisbane, the captain spoke of how tough it is to drop the successful pair when on the road.

Since the pair was united in T20Is in 2016 and in ODIs in 2017, Bumrah – the current No 1 bowler in ODIs – has taken the most wickets (76) from the most games (43), followed by Hardik Pandya (40 in 42 ODIs) and Bhuvneshwar (39 in 38 ODIs). In this time, Umesh Yadav has played 18 ODIs from which he has taken 27 wickets, followed by the rookie left-arm pacer Khaleel Ahmed who debuted in September has managed 11 wickets in six ODIs. Mohammed Shami, on account of fitness to an extent, has played only five ODIs in this period while names such as Dhawal Kulkarni, Shardul Thakur, Barinder Sran, Deepal Chahar and Siddarth Kaul have made fleeting appearances.

In T20Is, the situation is pretty much the same. Bumrah is India s leading fast bowler with 33 wickets from 28 games followed by Pandya with 24 from 26, Bhuvneshwar with 18 from 18, Jaydev Unadkat with 14 from 10, Ashish Nehra with nine from eight and Shardul and Umesh with eight each from seven and five games respectively.

These names have most been given chances in ODIs and T20Is when Bumrah and Bhuvneshwar have been rested or injured, and with the wrist-spinning pair of Kuldeep Yadav and Yuzvendra Chahal finding success, the options have been further limited for Indian quicks to break into the XI.

The success of Bumrah and Bhuvneshwar has made it it tough for Kohli and the team management to give other Indian quicks many chances, the skipper said.

It does. You think about giving others a go at the start of a series but then again you think that the first few games are important, so if the other side wins a game or two then you still go and back on Bhuvi and Bumrah, said Kohli on Tuesday in Brisbane. Both of them have been outstanding, they are thinking bowlers and understand the situation and get a gut feeling of what a batsman is looking to do before they bowl. The ability to sort of predict what s going to happen on each ball is what keeps them a step ahead of the batsmen, most of the times.

“Sometimes they will get dominated, like everyone does, but I think 85-90 per cent of the time they are spot on and that s because they are always looking at how the game s going, said Kohli. That has been their strength and any captain would love to have both of them in their bowling attack. I ve been very lucky to have both of them bowling so well for the team and giving us those breakthroughs in difficult situations, at the death, they ve been brilliant.

Kohli outlined the fact that with such success as a pair, chances of other fast bowlers getting a chance leading up to the World Cup will be tough. India play three ODIs in Australia in January then move to New Zealand for a full series before returning home to face Zimbabwe before the IPL.

“From now on its going to be more difficult for others to step in unless there s any sort of workload issue because until the World Cup we want our 11 that s going to play together to play together as long as possible. There aren t many games left to go,” he said. 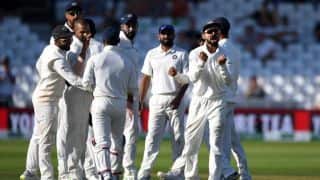 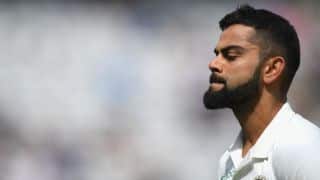