Lehmann said that Steve Smith, who was suspended for 12 months along with Warner, should have had more control on the situation.

Former Australia coach Darren Lehmann reckons Cameron Bancroft, among the three suspended in the ball-tampering saga that unfolded during the Cape Town Test against South Africa in March this year, should have consulted the coaching staff after David Warner urged him to use sandpaper to tamper the ball.

Yeah, he could ve and should ve (come to the coaches), I think he says that, Lehmann told Macquarie Sports Radio on Wednesday.

He should ve come to us, at the end of the day it was a mistake we know that. (It was) a severe mistake made by the guys and a lot of people have suffered one way or the other through that. We know it shouldn t have happened, but it did.

ALSO READ: I had the opportunity to stop it and I didn’t do it: Steve Smith on ball-tampering plan

A Cricket Australia investigation that Warner was the mastermind behind the plot. Dave suggested to me to carry the action out on the ball given the situation we were in the game and I didn’t know any better,” said Bancroft.

I didn’t know any better because I just wanted to fit in and feel valued really. As simple as that.

The decision was based around my values, what I valued at the time, and I valued fitting in … you hope that fitting in earns you respect and with that, I guess, there came a pretty big cost for the mistake.

Lehmann, who immediately stepped down from his role in the aftermath of the scandal, said the captain Steve Smith, who was suspended for 12 months along with Warner, should have had more control on the situation.

Smith as captain, his disappointing thing that he spoke about was as captain of the country he should ve had more control of it, Lehmann said.

Steven decided to turn a blind eye I still can t understand the pressures of captaining your country, it s quite high you would think. 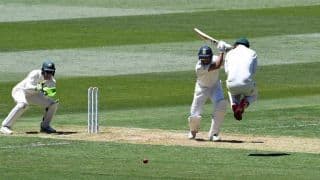