Du Plessis said that de Kock was picked over the far more experienced Amla and Duminy to see how 25-year-old responded to the additional responsibility.

Faf du Plessis, the injured South Africa captain, has revealed how the decision to name Quinton de Kock as his stand-in for the remainder of the ODIs in Sri Lanka was taken by the team management with an eye on developing the wicketkeeper-batsman s game.

Du Plessis was forced out of the ongoing ODI series due to a right shoulder injury after three games, with opener de Kock named as captain for the fourth and fifth ODIs despite having no prior leadership experience. Speaking to reporters on arrival in Cape Town on Friday, du Plessis said that de Kock was picked over the far more experienced Hashim Amla and JP Duminy to see how 25-year-old responded to the additional responsibility.

“We felt that when Graeme (Smith) left there was no real opportunities for young leaders in the team to get one or two occasions where they could captain without being the full-time captain,” said du Plessis. “You can use that opportunity to learn. There are two or three young guys in the team who have some leadership capabilities. With guys like Quinton it’s more about developing their personalities and character. Someone like Quinton will grow a lot just by getting extra responsibility. It doesn’t mean that he will be captain in the future or he won’t, we just see an opportunity for him to grow as a player.”

South Africa, after a hat-trick of wins, lost the rain-hit fourth ODI at Pallekele by three runs. The final ODI is on Sunday in Colombo.

Du Plessis was hopeful that his replacement could take plenty from these two matches in charge.

“When I do eventually come back hopefully he will be better off for it with a better understanding of what it’s like to be a senior player in the team,” he said. “As a player it’s easy to just focus on your own game and when you are captain you don’t have that luxury, so this will teach him a different side of cricket.” 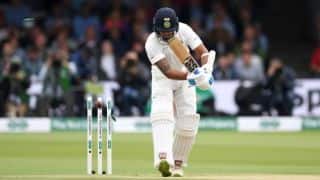