It is now time for West Indies to produce it's own T20 glamour as the fifth edition of the CPL 2017 is all set to get underway from August 4, 2017.

With Twenty20 (T20) cricket creating wonders worldwide, the T20 leagues have started taking over most of thew cricketing schedule in most of the countries. Apart from the Indian Premier League (IPL), which concluded earlier in 2017, and the ongoing Natwest T20 Blast in England, it is now time for West Indies to produce it’s own T20 glamour as the fifth edition of the Caribbean Premier League (CPL) 2017 is all set to get underway from August 4, 2017. It is set to be competed by six teams in the form of Barbados Tridents, Guyana Amazon Warriors, Jamaica Tallahwahs, St Kitts and Nevis Patriots, St Lucia Stars and Trinbago Knight Riders, while the Tallahwahs are the defending champions, after they won their record second title in 2016. CPL 2017 schedule: Dates, venues and timings

The complete squad along with player details of the teams participating in the tournament is given below: 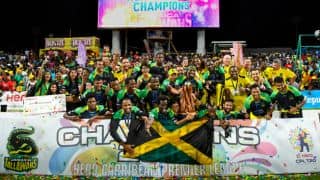