West Indies managed to reach an average total of 124 for the loss of eight wickets in the alloted 20 overs of the fourth T20I.

West Indies opener Chadwick Walton managed to somewhat dilute a terrific bowling attack by visitors Pakistan, as he scored a decent 40, while skipper Carlos Brathwaite too was steady enough to contribute an unbeaten 37, as the hosts managed to reach an average total of 124 for the loss of eight wickets in the alloted 20 overs of the fourth and final Twenty20 International (T20I) at the Queen’s Park Oval in Port of Spain, Trinidad on Sunday. As for Pakistan, Hasan Ali and Shadab Khan were the troublemakers, as they claimed a couple of wickets each to pus the hosts into the backfoot. FULL CRICKET SCORECARD: Pakistan vs West Indies 2017, 4th T20I at Port of Spain

Earlier, Pakistan skipper Sarfraz Ahmed won the coin toss and elected to bowl first this time on a slow track, in an effort to neutralise the loss of the last tie here on Saturday, as he moved in with a change, replacing Sohail Tanvir with Rumman Raees. As for West Indies, skipper Brathwaite certainly did not make any change following the win on Saturday, and decided to the same winning XI and stand a chance to square the series. However, with the series still in favour of Pakistan, West Indies had a pressure on them, but the momentum was certainly in favour of the hosts.

Windies were off to an average start. However, the openers failed to get it off to a big one, as with 27 runs on the board, the opening wicket in the form of Evin Lewis, who was the Man of the Match on Saturday, courtesy to his match-winning knock of 91, fell for mere seven to Imad Wasim in the third over. It was followed by a brief 25-run stand, before fellow opener Chadwick Walton fell for a healthy 40 to Shadab Khan in the ninth over. With his dismissal, it looked like the pillar of the Winides batting was broken. FULL CRICKET UPDATES: Pakistan vs West Indies 2017, 4th T20I at Port of Spain

The fear of a collapse seemed to be taking a toll on the incoming batsmen, as at the score of 59, it was Jason Mohammed, who fell for a mere single to Hasan Ali in the 11th over, and was followed by Lendl Simmons just 14 runs later, who too fell for a mere single, owing to an unfortunate run out in the 13th over, while the very next ball saw veteran Marlon Samuels being bowled by Hasan Ali for 22, thus seemingly ending hopes for a big West Indies total.

At the score of 82, the hard-hitter Kieron Pollard too was dismissed cheaply for mere three off Rumman Raees in the 15th overs, while the next over saw the dismissal of Jason Holder for an unfortunate duck, just a run later. However surprisingly, it was then the pair of skipper Brathwaite and Sunil Narine, who took deep charge of the innings and started to display some fireworks at the closing stages of the innings.

The pair managed to put up a crucial 38-runs stand for the seventh wicket, before Narine was dismissed for mere nine by Wahab Riaz in the 19th over, while it was the pair of Brathwaite and Samuel Badree, who added three more runs to finish the innings, as Pakistan posted a modest total of 124 for the loss of eight wickets, while Hasan Ali and Sahdab Khan claimed a couple of wickets each for Pakistan. 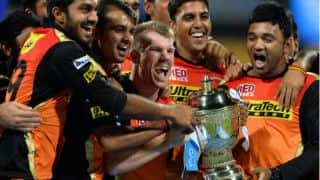 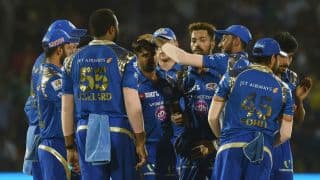