The 2012-13 ICC Champions League Twenty20 tournament, which was held in South Africa, has reportedly been listed by former New Zealand batsman Lou Vincent as one of the events where match-fixing allegedly took place.

This disgraced player has agreed a plea bargain in the hope of avoiding criminal prosecution for his involvement in and awareness of spot-fixing in several countries over the period between 2008 and 2012.

According to Sport24, county matches in England, games at the Hong Kong Sixes and also the South Africa-hosted T20 Champions League tournament in October 2012 have been listed by Vincent as involving corruption.

A Cricket South Africa (CSA) spokesperson said they were not in a position to comment on the matter and suggested referring queries to the CLT20 governing council, the report added. 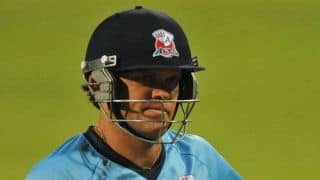