Sri Lanka coach Chandika Hathurusingha today termed India favourites in the triangular T20 series, despite entering the tournament with a second-string side that does not have the likes of Virat Kohli and Bhuvneshwar Kumar.

“If you go by the rankings, India is the top team in the tournament, so they always start ahead of the other teams,” Hathurusingha said on the eve of the tournament.

He added, “Whoever plays for India, it is still a very strong team. We have to start well because we haven’t been doing well at home. With Bangladesh, because of the last series, we probably have a little edge over them mentally.”

Although Sri Lanka have recently showed improvement in Bangladesh, their record against India is woeful. India have won the seven most-recent T20s between these sides, and are ranked third in the world, while Sri Lanka are eighth.

Kohli and Mahendra Singh Dhoni have been rested from the Nidahas Trophy. Rohit Sharma was named stand-in captain of India’s 15-man squad, with Shikhar Dhawan his deputy. 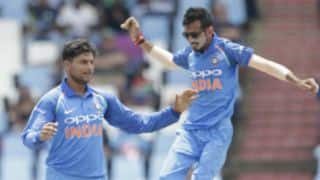