Kimber and Collins have started it off. Will you keep #ChangeCricket going?

Thanks to Jarrod Kimber and Sam Collins, #ChangeCricket has been trending in the wake of saving the sport that we love the most. Kimber and Collins, makers of the much-acclaimed documentary Death of a Gentleman, has taken perhaps the greatest stance against corruption that is gradually destroying cricket. Death of a Gentleman portrays the miserable condition at which cricket is in at present and no one but International Cricket Council (ICC), headed by the ‘Big Three’ (India, Australia and England) that controls the world of cricket is to be blamed for it. Kimber and Collins left multiple messages, the strongest among which were expansion of the sport and the claim for more transparency in the way cricket is run. VIDEO: #ChangeCricket protesters observe minute’s silence ahead of final Ashes 2015 Test

While the three boards control 52 per cent of the revenue, the ‘Big Three’ have been keen on sacrificing the Test format in favour of the short forms of the game. The other 102 ICC members (this includes 7 Test-playing nations) have access to a mere 48 per cent of the revenues.
Gideon Haigh, who has been interviewed in the documentary, asked a very pertinent question: “Does cricket make money to exist or does cricket exist to make money?” Few have put up the question so pertinently. As Kimber and Collins have portrayed so efficiently and eloquently, that is the biggest problem cricket faces at this moment.

England Cricket Board (ECB) blocking the media accreditation of Kimber following the release of the documentary manifested the seriousness and impact of the movie. However, to great disappointment for the ‘Big Three’, there was nothing that could stop Kimber and Collins from executing their responsibilities towards the sport that plays the most vital role in their lives — something that is true for most of us.
While the fans have held grievances over years, they did not really do anything in protest of ICC’s moves. Kimber and Collins took the stance; they planned an event; and the world of cricket responded. They called the movement #ChangeCricket, and it became viral on social media even before the actual event started. PHOTOS: #ChangeCricket protest outside The Oval ahead of the Ashes 2015 final Test

The initiative started on 10 AM on Day one of the fifth Ashes Test at the Oval, just outside the Hobbs Gates. Kimber and Collins, along with dozens of others, voiced protest against the way in which cricket is run. Other than Kimber, Collins and Haigh, perhaps the most famous face was that of Damian Collins, a lawmaker with Britain’s governing Conservative Party. They held a three minutes’ silence — a minute each for India, England and Australia.

Kimber and Collins have started it off. Will you keep #ChangeCricket going? 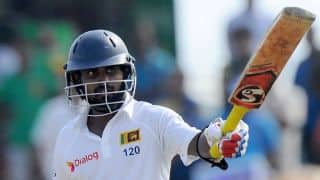