Less than a week after captaining India to World Cup glory, MS Dhoni donned the canary yellow and marshaled his CSK superbly to steal a win from under KKR’s feet. At 64 for 0 in the ninth over, chasing 154, KKR were in a good place but Dhoni’s smart maneuvering of his bowlers and a direct hit from his own arm turned the tide decisively. 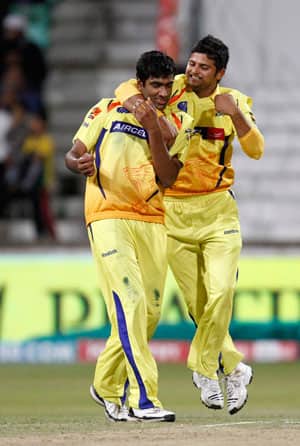 Less than a week after captaining India to World Cup glory, MS Dhoni donned the canary yellow and marshaled his CSK superbly to steal a win from under KKR’s feet. At 64 for 0 in the ninth over, chasing 154, KKR were in a good place but Dhoni’s smart maneuvering of his bowlers and a direct hit from his own arm turned the tide decisively. Dhoni’s decision to turn to Shabad Jakati and Ravichandran Ashwin accounted for the well-set KKR openers, crucially Jacques Kallis for 54, and when he tossed the ball to Suresh Raina it produced immediate rewards.

KKR suddenly found themselves at 120 for five with 19 deliveries left. A manic 19th over which cost 17 and accounted for Manoj Tiwary, left it one a knife’s edge. Nine off the last over, four wickets left, Tim Southee to bowl. The first ball brought two, the second a catch to third man, the third two more, the fourth a dot, and the fifth a single. The luckless Rajat Bhatia needed to hit the final ball for four; he missed and could only scamper one.

The breathless finale was entirely in keeping with a contest that twisted and turned. Chennai’s innings had been carried by a measured – by Twenty20 standards – 64 from Srikkanth Aniruddha. The early loss of Murali Vijay, chipping to mid-on off Iqbal Abdulla in the opening over, did little to deter CSK. Aniruddha, promoted to open the innings, was given a life when Pathan dropped a return catch and proceeded to make KKR pay for the reprieve. Kallis was taken for three boundaries in his opening over, after which Sarabjit Ladda was charged and driven for a straight six.

Raina, also dropped on 11 by a juggling Pathan at mid-on, rode his luck to play some lovely inside-out drives off the spinners over extra cover. His innings came to an end when he slog-swept Pathan out to deep midwicket. That brought to the crease Dhoni, whose presence raised a loud cheer from the Chennai fans. Immediately Dhoni was away with some big shots, forcing Aniruddha to follow with a slogged six off Ladda. Dhoni’s 21-ball 29 injected some oomph into the innings, and the last four balls of the innings went for 15, leaving CSK with belief that may have enough on the board.

Having taken two for 34 with the ball, Kallis set about KKR’s reply in typically bullish manner. He and Manvinder Bisla were almost equal partners in the effort, with Bisla playing some hard-handed inside-out drives and Kallis his usual busy self with shots all around the wicket. Southee, Chennai’s latest import, was taken for 18 in his first two overs as Kallis went onto the offensive, and the first breakthrough didn’t come until Jakati spun one past Bisla’s wild charge to have him stumped.

With sublime strokes off pace and spin, Kallis refused to get bogged down. Albie Morkel was carved over cover and steered delicately to third man, while Jakati was punched off the back foot past extra cover. With Yusuf Pathan signaling his intent with a thumped six, KKR were in a good place and didn’t need to do anything rash.

A moment of brilliance from Dhoni sent Pathan back. Quick to collect the ball and nail the stumps with a direct hit, Dhoni ran out Pathan for 11 to give Chennai some relief. There were further cheers in the Chennai camp when Kallis, after cruising past fifty, paddled Ashwin to short fine leg. Suddenly the jitters had set in, and Dhoni’s calculated captaincy continued as he tossed the ball to Raina who immediately purchased turn to have Eoin Morgan stumped.

The match had turned on its head, and out walked KKR’s captain Gautam Gambhir at No 6. Not for the first time, Gambhir was run out for 1 when trying to attempt a risky second, and his dismissal sparked delirium around the stadium. KKR needed a big over, and it came when Suraj Randiv was given the ball for the penultimate over. After Laxmi Ratan Shulka took four off the first ball, Tiwary cleared his front leg to smack two sixes; though he was stumped off the last ball, he had done enough to set up a grandstand finish. In the end, by a hair, CSK emerged on top. To be auctioned for $900,000 was mindboggling, says Deccan Chargers’ Daniel Christian