Ravichandran Ashwin who has been dropped from India s limited over format is in doubt to be retained.

The Chennai Super Kings who were banned for two years will make a comeback in this IPL. With each team having the right to retain players CSK are are all set to retain their core group including skipper Mahendra Singh Dhoni, Suresh Raina and Ravindra Jadeja for the upcoming edition of IPL.

“We have not yet submitted our retention list but it goes without saying that Dhoni and Raina are all but retained. The third retention in all likelihood will be Ravindra Jadeja,” an IPL official, who is aware about CSK’s team strategy told PTI.

Ravichandran Ashwin who has been dropped from India s limited over format is in doubt to be retained. Ashwin played his last T20I almost a year ago. CSK could go for the Right To Match (RTM) as Ashwin is the most successful International cricketer from Tamil Nadu. M S Washington Sundar, who made his debut in second ODI against Sri Lanka is likely to take Ashwin s spot as a potent off-spinner during the IPL 2017.

Dwayne Bravo among other foreign players can be expected to be bought through RTM card. The other players to look out for are Faf du Plessis and Brendon McCullum.

According to the IPL Governing Council announcement a franchise could retain up to five players by virtue of a combination of player retention (pre-player auction) and right to match (RTM) (during the player auction).

The franchise would send the list of retained players soon with the cut-off date for forwarding the wish-list is January 4, 2018 according to a source. 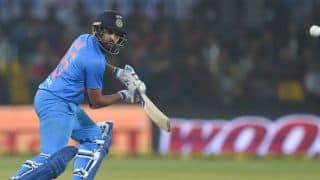