In a good contest between bat and ball, CSK scored 181 for eight against RCB.

Chennai Super Kings (CSK) scored 181 for 8 against Royal Challengers Bangalore (RCB) in their Indian Premier League (IPL) 2015 match at the M Chinnaswamy Stadium. While the total is a decent one, CSK could have scored a lot more on the board. However, RCB did well to pull things back and restrict CSK to their eventual total.

The rain came down as the teams were set to start the game. As a result, the match was delayed by 25 minutes. RCB had won the toss and had chosen to bowl first. They made a few changes to their side as Chris Gayle, quite surprisingly, had to sit out. Mitchell Starc returned to bolster the pace attack. Then, Sarfaraz Khan was also included as a batsman, becoming the youngest player to represent a team in the IPL. Live updates: Royal Challengers Bangalore and Chennai Super Kings Match 20 IPL 2015

RCB started well when Yuzvendra Chahal had Brendon McCullum early. Dwayne Smith and Suresh Raina had a quiet rebuilding phase, after which both teed off to get some quick runs. Smith completed 5,000 T20 runs during the innings and continued to muscle the ball around, clearing the boundary on three occasions. However, on 39, he edged to Dinesh Karthik of the bowling of Harshal Patel.

CSK’s batting line-up had a different look today. MS Dhoni promoted himself to No. 4 and he may have eyed a return to his top form. At 70 for two in the ninth over, he had the time to do it. But, it was Raina who capitalised on the opportunities, smashing his way to 62 off 32 balls. In one of the overs, he also managed to hit three sixes. CSK were looking good for 200 when they were 124 for two in the 13th over. That is when things turned a touch. Raina smashed it down the ground and was caught by Rilee Rossouw . Live scorecard: Royal Challengers Bangalore and Chennai Super Kings Match 20 IPL 2015

Instead of Faf du Plessis or Dwayne Bravo, Ravindra Jadeja walked in. CSK’s innings stalled there as Dhoni was then dismissed in the 14th over as he too holed out to the deep on the off-side. An over later, Jadeja failed to clear long-off and was taken. While they did managed to score a few runs, they weren’t at the pace one would have expected. There were many mishits along the way and the trend continued when Bravo was dismissed for five in the slog overs.

A lot of the credit has to go to the RCB spinners, who did a splendid job. Although Chahal was a touch expensive, he accounted for three important wickets. Iqbal Abdulla also made his mark with his left-arm spin as he took two wickets for 36 runs. Perhaps their economy rate could have been better, but they did pick up majority of the wickets for RCB.

Wickets kept falling at regular intervals for CSK and they lost momentum rapidly. Du Plessis remained the lone figure through that struggle. He scored a 17-ball 30 and remained unbeaten, failing to get strike for the first five balls of the last over as Starc bullied Mohit Sharma. CSK had lost their last six wickets for only 53 runs. 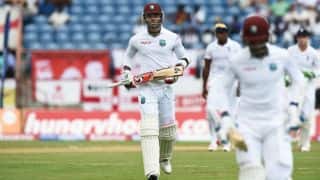