Chennai Super Kings (CSK) take on the Royal Challengers Bangalore (RCB) in the second qualifier of the IPL 2015.

The winner of this clash wikll qualify for the IPL 2015 final, where in it will face the high-flying Mumbai Indians. The Rohit Sharma-led Mumbai Indians had crushed Chennai by 25 runs in the first qualifier to make it to the final of the ongoing tournament.  Catch live cricket score and ball-by-ball commentary of the Chennai Super Kings vs Royal Challengers Bangalore IPL 2015 Qualifier 2 here

RCB will hope that they carry their winning momentum, as they had slammed the Rajasthan Royals by 71 runs in the Eliminator. they have fared well this tournament, with their players performing as a unit. However, it will be tough ask against Chennai, who have a knack of finding ways to win from nowhere.

Catch all the action live and exclusive on Sony Six and Sony Six HD, and also Set Max in hindi commentary. Also catch the live streaming of the Chennai Super Kings (CSK) vs Royal Challengers Bangalore (RCB) match on the go by just logging on to starsports.com. READ: RCB’s guide to beat CSK in IPL 2015 Qualifier 2 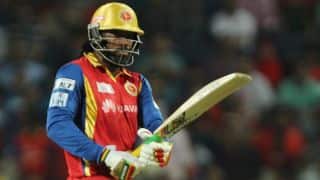