DDCA vice-president Chetan Chauhan claims that all the information give by Kirti Azad was available before as well.

New Delhi: Reacting to Kirti Azad’s claim of financial bunglings in the DDCA today, its vice-president Chetan Chauhan said that all the material the BJP MP relied upon for his allegations were taken from the earlier findings on the basis of which S P Bansal was removed as president. “This so called expose is on the basis of our findings, which were done by the three-member committee. It was due to those findings that SP Bansal was removed,” Chauhan told PTI after Azad addressed a press conference here. Azad, who has been campaigning against alleged corruption in Delhi’s cricket body, today addressed a press conference here but did not take the name of Finance Minister Arun Jaitley, under whose charge as president of DDCA he claimed there were financial bunglings ALSO READ: Kirti Azad: My accusations against DDCA not personal

“All this happened after Arun Jaitley’s term in DDCA and it happened during SP Bansal’s rein. Ye saara kaarnama unka hai (All these is his doing).” Asked about the video footages of the “fake bills” shown by Azad during the press conference, Chauhan said, “Look, the work has been done for sure. It’s not that the work did not happen, but the way it was allotted was wrong. “I insist all these are in the fact finding committee’s report. Ye hamari report se nikaal rahe hain (All these are being taken out of our report),” he said. ALSO READ: Kirti Azad launches all out attack against DDCA; submits ‘proof’ of corruption in board 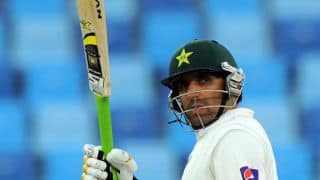