Cheteshwar Pujara said bowling is just one option he wants to add in his game.

You have started bowling as well which made news recently. But we haven’t seen you bowl in the T20s you played now?

I have just started bowling right-arm leg spin in the nets but our team has plenty of bowling options. T20 is a format where one over can change the complexion of the game. We don’t want to take any risks. I need to get a lot of confidence with my bowling. It’s been around four years that I have never bowled. So it will take at least 6-8 months for me to at least start bowling in the match. Maybe in ODIs or Tests I can bowl a couple of overs in Tests and ODIs but not in T20s.

Do you think it is necessary for you to bowl to get in to the team?

No I don’t think so. I haven’t started bowling to get in to the ODI side because my batting is good enough and I’ve even improved my fielding. So bowling is not a way to get in to the playing XI for me. It’s just one option I want to add in my game.

You’ve had a successful Test career so far but things didn’t go well in the recent Test series in New Zealand. Have you analysed what went wrong?

Success and failure are part of a cricketer’s life. I thought that I was batting really well. Just once I played a bad shot in the first innings of first Test of the first innings where I tried to drive at a wide ball. Apart from that I got couple of decent balls. I got set and got 20 odd runs facing over 50 balls. I was comfortable playing over there. It was just that I got out after being set. I could have defended some of the good balls which got me out. I still have to work on it. With more experience, I will only get better.

You have been compared with Rahul Dravid a lot, have you spoken to him regarding your batting recently?

There was a promotional event a few days back where had a chance to meet him there. It was a very good interaction. I had an opportunity to interact with him for half an hour. He was very positive about me performing well in the ODIs. He never had any doubt in my ODI performance. I was very happy to get a lot of advice from him.

With some important tours ahead, are you focusing on keeping your fitness intact?

I have been working really hard, it’s almost six-eight months that I have not missed a fitness session. If I keep on doing it I will have little to worry. Cricket is such a game where anything can happen on the field, you can’t be sure of it. But I am confident at the moment.

Any there any other areas you are working upon?

At the moment I think there are a couple shots where I want to be sure of playing even on the first of a T20 format. It’s just about making sure of my strength and understand the shots I will play in the T20 format. 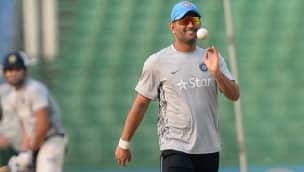