The live cricket streaming of Chittagong Vikings vs Rajshahi Kings, Match 16, BPL 2016, is available on Sony LIV, and channel9.com in Bangladesh.

Two of the giant teams in the form of Chittagong Vikings and Rajshahi Kings take on each other, in Match 16 of the ongoing Bangladesh Premier League (BPL) 2016, at the Zahur Ahmed Chowdhury Stadium in Chittagong on Friday, as the live cricket streaming of the match is available on Sony LIV, and channel9.com in Bangladesh, while the live telecast of the match is available on Sony SIX and Sony SIX HD, and Channel 9 in Bangladesh. Rajshahi are currently placed in the fifth spot in the points table with a couple of points from three games, while Chittagong are a place down in the sixth spot, with a couple of points as well from five games. Bangladesh Premier League (BPL) 2016: Points table and team standings

Earlier on Thursday, a poor show by the Chittagong Vikings batsmen handed the Dhaka Dynamites a comfortable 19-run victory as the teams faced each other in Match No. 14 of the Bangladesh Premier League (BPL) 2016. The match was played at the Zahur Ahmed Chowdhury Stadium, Chittagong. The Dynamites did not do very well with the bat either, ending their innings for a par score of 148 runs but the Vikings batting failed entirely to build up any significant partnership, ending up losing the match despite chasing an achievable target.

The Vikings won the toss and skipper Tamim Iqbal opted to bowl first. Kumar Sangakkara along with Mehedi Maruf opened Dynamite s innings. The table toppers did not look to be a tad bit concerned about the opponents bowling as Maruf went all guns blazing from the very beginning. 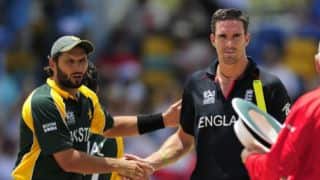