West Indies announced their squad for the Australia tour on Wednesday, with Jason Holder once again leading the side.

Chris Gayle and Dwayne Bravo are among the key West Indian players who will miss out on the upcoming three-match Test series in their tour of Australia next month. West Indies on Wednesday announced their squad for the upcoming tour, from which names such as that of Gayle, Darren Sammy, Dwayne Bravo and Keiron Pollard were missing, all of whom have been out of contention for a place in the Test squad for quite some time now. Jason Holder will continue in his role as the captain of the side, which also features the likes of Kraigg Brathwaite, Devendra Bishoo, Jomel Warrican, etc. all of whom produced good performances during the recent tour of Sri Lanka.

Phil Simmons, who had been suspended as the West Indies head coach before the tour of Sri Lanka, is said to be returning to the position ahead of the scheduled tour, in which the first Test begins on December 10. Action was taken by the West Indies Cricket Board (WICB) against Simmons after the latter publicly questioned the board for not picking Bravo and Pollard for the ODI squad for the tour of Sri Lanka. READ: Phil Simmons set to return as West Indies coach

“I regret my public outburst during a press conference, and the revelation of the vote that took place at the selection meeting,” Simmons was quoted as saying according to a report by Wide World of Sports.

“I extend a public apology to all whom I may have offended. I have personally apologised to my fellow selectors and the WICB and now do so again publicly. I am looking forward to putting this behind me and doing the job I enjoy with the West Indies’ senior men’s teams,” added Simmons.

West Indies are currently engaged in their last leg of the tour of Sri Lanka, with only one Twenty20 International (T20I) left for them to play. The visitors have had a terrible time in the island nation so far, getting whitewashed in the Test and One-Day International (ODI) series 0-2 and 0-3, before losing the first T20I as well, which makes the prospect of facing a new-look by effective Australian side captained by Steven Smith all the more difficult. 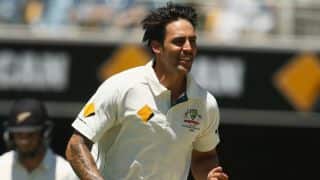