Mumbai: The International Cricket Council’s (ICC) chief executive Dave Richardson said here on Monday that West Indian batsman Chris Gayle’s controversial post-match comments in the Big Bash League (BBL) could have been avoided, adding the game will hardly be affected by the controversy. Gayle was fined 10,000 Australian dollars ($7,190) for asking a female TV presenter Mel McLaughlin out on live television after a BBL match. Gayle later apologised for the incident but said the reactions were seen as “out of proportion”. ALSO READ: Shane Watson not surprised with Chris Gayle’s ‘inappropriate’ interview

“Gayle comments in BBL could have been avoided. But I think cricket does not need to worry about it. Cricket can easily move on from here on without worrying,” Richardson said at a press conference here to announce ICC’s eight-year sponsorship (2016-2023) deal with money transfer services MoneyGram International. The ICC CEO also spoke about the growth of women viewership and their involvement in the sport, which is a big plus for the game. ALSO READ: Ian Chappell wants worldwide ban on Chris Gayle

“Of the viewership of ICC events, 40 percent of them are women and it is much higher when it comes to T20s. It is a strategy to engage women in the game more through T20. It is not about females watching the game but about world audience watching women play,” he said. “I can say that worldwide more than one million women are playing and the quality of the game is also increasing day by day. In World Cup events, earlier England and Australia used to win; now we will find India, West Indies, South Africa winning events. Very proud of women’s cricket and I hope it will increase day by day,” the former South Africa cricketer said.

The 56-year-old said the introduction of new teams in the upcoming World T20 in India in March-April showed the tremendous growth of the game. Debutant Oman will play in their first ICC event alongside Scotland, Hong Kong and Afghanistan. ALSO READ: Chris Gayle to lady interviewer, “Don’t blush, baby”

“The game has grown tremendously in the last 10-15 years. T20 format is a tool to globalize the game. In the World T20 in India we will see new teams playing which is a real boost for the game. Teams like Oman who will debut in ICC event and others like Scotland, Hong Kong, Afghanistan will also make the event big,” Richardson added. Steven Smith: Australia have discussed Barinder Sran ahead of 1st ODI vs India at Perth 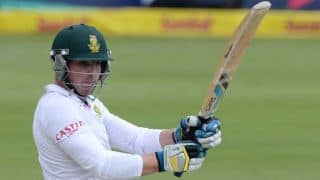