Chris Gayle smashed 92 off just 47 deliveries in a winning effort for Barisal Bulls against Chittagong Vikings.

Chris Gayle hammered an unbeaten 92 off just 47 deliveries in a match-winning effort in the ongoing Bangladesh Premier League (BPL) 2015. The burly West Indian’s whirlwind knock helped Barisal Bulls chase the 136-run target set by the Chittagong Vikings with eight wickets and five overs to spare. Opening the innings for the Bulls alongside Rony Talukdar, Gayle hammered six fours and nine sixes at a strike rate of 195.74, with his innings accounting for more than half of his team’s total. Meanwhile, Gayle’s knock comes at a time when the West Indians, his national side, is struggling in Australia, having lost their warm-up fixture to Cricket Australia XI (CA XI) by 10 wickets and entering the first Test as the underdogs. LIVE CRICKET SCORECARD: Australia vs West Indies 2015-16, 1st Test at Hobart, Day 1

Disciplined bowling performances from Kevon Cooper (4-0-24-2) and Sohag Gazi (4-0-17-1) helped restrict the Chittagong Vikings to a score of 135 for seven at the end of their stipulated 20 overs, with three batsmen scoring in the 20s. In reply, the Bulls were off to a shaky start when wicketkeeper-batsman Talukdar was run out by Tillakaratne Dilshan after some poor running. Mehedi Maruf was next to depart, getting bowled by Taskin Ahmed for a run-a-ball 18, with the scoreboard reading 31 for the loss of two in the fifth over. UPDATES: Chittagong Vikings vs Barisal Bulls, BPL 2015, Match 28 at Dhaka

Gayle began his charge shortly after the second dismissal, smashing 19 runs off the following over bowled by Asif Ahmed. He went after the spinners and pacers alike, bringing up his half-century with a boundary off Taskin in his 35th delivery. He eventually took his side home with four consecutive sixes in the 15th over off the bowling of Jeevan Mendis.

Gayle, who earlier was snubbed by the national selectors for the tour of Australia, has not played for the West Indies since their quarter-final thrashing at the hands of New Zealand in the ICC Cricket World Cup 2015. Gayle, who is known to have dicey relations with the West Indies Cricket Board (WICB), last played Test cricket against Bangladesh in a home series in September last year. 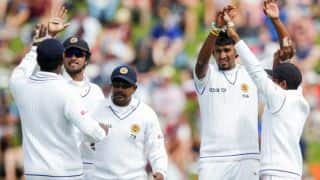