Jamaica Tallawahs are now currently on top of the CPL Points table with two wins out of two.

Jamaica Tallawahs cruised to a 7-wicket victory against Trinbago Knight Riders in the 7th match of the Caribbean Premier League (CPL) 2016. The match which was being played at the Queen’s Park Oval in Port of Spain, Trinidad saw a typical Chris Gayle innings to seal the win for the Tallawahs with 10 balls to spare. Gayle scored his third CPL century and remained not out at 108 off 54 balls on a pitch that did look like a batting paradise. Tallawahs chased down a target of 192 runs after a superb batting effort by Trinago Knight Riders. Cameos from Kumar Sangakkara, Andre Russell and Rovman Powell along with Gayle’s wonderfully paced innings saw Tallawahs through. READ: Chris Lynn masterminds Guyana Amazon Warriors’ win over Trinbago Knight Riders in Match 5 of Caribbean Premier League

After winning the toss Gayle had decided to bowl first first. Hashim Amla and Brendon McCullum took Trinbago off to a flying start but then McCullum was bowled by Imad Wasim. Colin Munro and Amla then put on a big partnership of 103 runs for the 2nd wicket to steer the ship forward for the team. Both the players notched up their half-centuries and looked good for more. But Munro departed soon as he was caught by Sangakkakra off the bowling of Dale Steyn. He made 55 off 39 balls. Amla did carry on for a while but he was then picked up by Kesrick Williams as Sangakkara completed the catch. Trinbago eventually ended at 191-4 in 20 overs.

In response Gayle started off slowly but changed gears soon after he was given a few lifelines. With 10 need off 12 balls, Powell hit a four and a six off the first two deliveries of the 19th over repectively. Gayle for his wonderful innings was also the Man of the match.

Man of the match: Chris Gayle 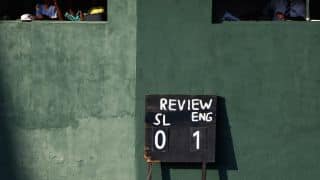