Afghanistan failed to capitalise on a good start as Zimbabwe clawed their way back into the contest.

Rahmanullah Gurbaz smashed 61 off 47 balls as Afghanistan posted 155-8 in their tri-series Twenty20 international tournament against Zimbabwe in Chittagong on Friday.

Gurbaz helped Afghanistan make a flying start, putting on 83 runs in the opening stand with Hazratullah Zazai (31) before Zimbabwe clawed their way back into the contest.

Afghanistan have already qualified for the final where they will face hosts Bangladesh on September 24. Zimbabwe have lost all their previous matches in the tournament.

Earlier, Afghanistan captain Rashid Khan won the toss and elected to bat first in their third match of the series.

Zimbabwe captain Hamilton Masakadza will retire after the match, bringing an end to his 18-year international career.

Bangladesh, who will face Afghanistan in the final on September 24, are the third team in the tournament. 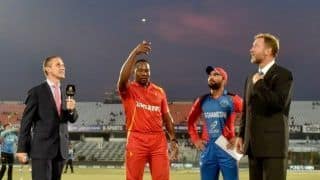 Afghanistan elect to bat against Zimbabwe in tri-series T20