When Afghanistan came in to bat, they were set a revised target of 123 in 15 overs as per the DLS method. But the entire Afghanistan batting line-up crumbled against a disciplined West Indies bowling department getting bowled out 93

West Indies defeated Afghanistan by 29 runs (DLS method) in the second Twenty20 International (T20I) at Basseterre. Batting first, West Indies managed to put 113 in 15 overs as rain played a spoilsport during the first innings. In reply Afghanistan were set a revised target of 123 in 15 overs. Yet again Afghanistan’s batting line-up crumbled against a disciplined West Indies bowling to get bundled out for 93. Kesrick Williams who was adjudged Man of the Match for his exceptional figures of 3 for 11 was helped by Carlos Brathwaite who nabbed took two wickets. These two were well supported by Samuel Badree, Sunil Narine and Jerome Taylor who took one-wicket each. FULL CRICKET SCORECARD: Afghanistan vs West Indies 2017, 2nd T20I at St Kitts

Chasing 123 in mere 90 deliveries, Afghanistan had a tough ask of keeping up to the required run-rate with conditions against their favour. The ball was nipping in sharply after the rain break. Brathwaite opted for Badree to open the bowling as the spinner with the ball gripping the surface with occasional unexpected bounce. Brathwaite s move was an instant success as Gulabdin Naib (12) was the first of the Afghanistan s batsmen to walk back. Taylor bowling from the other end did not put any enough pressure.

Afghanistan batsmen could never bear the pressure of keeping up to a high run-rate. Thus, in a bid to up the ante, majority of their players tried hitting over the top, only to find their wickets fall cheaply.

Earlier, in the first innings winning the toss West Indies decided to bat first. Openers Evin Lewis (25) and Chadwick Walton (29) gave a 46-run stand for the first wicket forming a solid base for the in-coming batsmen. Both these batsmen scored runs in a flurry against the Afghanistan pacers, but once the spinners were brought in the attack, the run-rate came down drastically.

A brief period of play was spoiled in the first innings which saw the game reduced to 15 overs per side with new rules. According to the new rules, only one bowler was allowed to bowl 3 overs maximum and the last part included of Afghanistan getting a new revised target according to DLS method.

Marlon Samules (22), Lendl Simmons (17*) and Carlos Brathwaite (*8) tried hitting some big shots down the ground toward the end of the first innings which took them to 113.

With this victory, West Indies have now sealed the three-game T20I series 2-0, having already won the series opener yesterday at the very same venue.

Man of the Match – Kesrick Williams 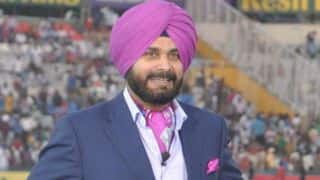