Henry Davids slammed quickfire 64 and Jacques Rudolph remained unbeaten on 49 to power Titans to a huge win by eight wickets against the Sunrisers Hyderabad in their Group B match at Ranchi. 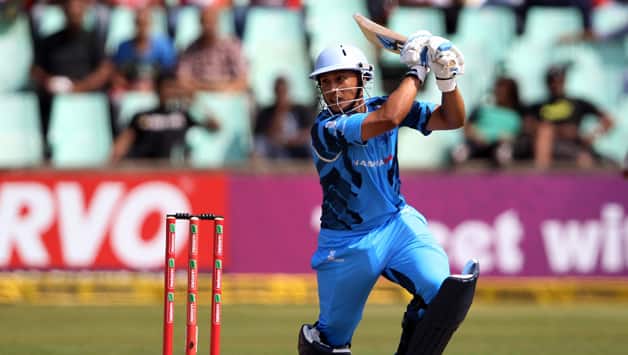 Henry Davids slammed quickfire 64 and Jacques Rudolph remained unbeaten on 49 to power Titans to a huge win by eight wickets against the Sunrisers Hyderabad in their Group B match at Ranchi.

Chasing a target of 146 runs to win, the Titans’ openers made a mincemeat of the star-studded Sunrisers’ bowling attack to achieve the target with 21 balls to spare.

Davids smashed four sixes and seven boundaries to score a rapid 64 off just 42 balls, while Rudolph played a cautious knock, garnering 49 runs from 42 balls with the help of three boundaries and two sixes.

The two batsmen added 112 runs to outgun the Sunrisers bowlers, and eventually shutting down all doors of comeback for the IPL side.

Titans began their chase in an aggressive manner led by their skipper Davids. The right-handed batsman struck a six in the first over off Karan Sharma to set the tone early on. He got a steady support from Rudolph at the other end. The two batsmen kept picking boundary off the loose balls and rotated the strike easily to keep the pressure off their side in a chase that could get tricky against a skillful Sunrisers Hyderabad bowling attack.

Davids struck three boundaries off Thisara Perera in the sixth over of their chase as the Titans raced to 53 in the first six overs, while Rudolph was comparatively quiet till then — having scored 13 runs off 16 balls with the help of one boundary. The left-handed South African batsman got into the groove only in the eighth over of the innings with the introduction of JP Duminy in the attack. Rudolph danced down the track twice in the over to collect two sixes as the Titans gained complete control in the game.

While Dhawan kept rotating his bowlers, it didn’t yield any result. Davids and Rudolph were dealing in boundaries and sixes as the Sunrisers were soon running out of ideas. The Titans’ captain completed his half-century in 32 balls with the help of four sixes and as many boundaries in the 10th over of the game.

Davids kept the pressure on the Sunrisers bowlers all the time, denying them any opportunity to make inroads. While he displayed his arsenal of strokes around the part, the perfect execution of the ‘Dilscoop’ shot off Darren Sammy in the 12th over of the game was to certify how well set he was at the crease.

Steyn was introduced into the attack once again in the 13th over of the game, and Sunrisers finally got the first wicket. Davids mistimed a length delivery pitched outside the off-stump, and Sammy took a fine catch to get rid of the dangerous batsman. But the damage was already done.

Davids slammed four sixes and seven boundary to score a fluent 64 off 42 balls.

Davids’s dismissal brought AB de Villiers at the crease, but he was soon back in the pavilion trying to finish off the game soon. de Villiers struck two boundaries off Ishant Sharma in the 14th over to get into the rhythm but he was caught by Perera after mistiming the third delivery.

The quick dismissals of Davids and de Villiers had no impact on the Titans, as Heino Kuhn teamed up with Rudolph to help his side achieve the target in 16.3 overs.

Man of the Match: Henry Davids