Their morale high after beating IPL winners Mumbai Indians, Rajasthan Royals would be hoping to consolidate their position when they take on Highveld Lions in a group A league match of the Champions League Twenty20 tournament on Wednesday. Their morale high after beating IPL winners Mumbai Indians, Rajasthan Royals would be hoping to consolidate their position when they take on Highveld Lions in a group A league match of the Champions League Twenty20 tournament on Wednesday.

The Royals have made the Sawai Man Singh stadium a fortress, stretching their winning streak here to nine consecutive matches from IPL-6.

“The wicket here suits us because we have the batsmen who are good shotmakers, bowlers too know the right areas to bowl on it,” Rajasthan Royals skipper Rahul Dravid had said recently.

Having put behind the spot-fixing controversy that hounded them in IPL 6, the hosts have gained in confidence which makes them slight favourites against the South African outfit.

The visitors were kept waiting in the dressing room as their match against Perth Scorchers was washed off due to heavy rains in Ahmadabad.

Lions captain Alviro Petersen had just enough time to win the toss and elect to bowl against Perth Scorchers before the persistent deluge arrived to wipe out any chance of play.

The visitors practiced hard for a week here to get used to the conditions and would be eager to test their mettle against the inaugural IPL champions Rajasthan Royals.

Rahul Dravid’s men hardly put a foot wrong against Mumbai and they seem have the resources to counter the Lions as well.

Most of their batsmen, especially Sanju Samson who struck a fine fifty and was associated in a mature match winning partnership with Ajinkya Rahane, are in fine form.

Shane Watson too carried his good form of Ashes series and was impressive, so was Stuart Binny who helped the hosts to a comfortable seven-wicket victory. The likes of Brad Hodge, Ashok Menaria, and Kevon Cooper have performed their roles to perfection.

The bowling too seems to going good. Vikramjeet Malik was the surprise against Mumbai while seasoned campaigner James Faulkner are more than handful.

The hosts might be tempted to play youngster Harmeet Singh or veteran Praveen Tambe keeping in view the visitors lack of exposure to such conditions.

Lions had qualified for the 2013 edition after winning the Ram Slam T20 Challenge, South Africa’s premier T20 event. Lions batsmen are expected to do their job but the onus is on the bowlers to call the shots. They have a fine new ball pair in Sohail Tanvir and Lonwabo Tsotsobe who are capable of making early inroads in the opposition line-up. Youngster Quinton de Kock and seasoned Neil McKenzie would lead the batting but they may find the going tough.

Royals, having beaten MI, are on four points with three games in hand. 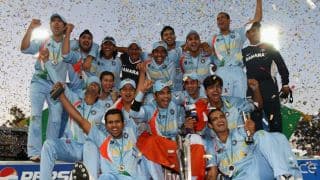