Dunk was disappointed with his team's performance against the Kings XI Punjab.

Hobart Hurricanes cruised to a six wicket victory over the South African side Cape Cobras on Sunday in the seventh game of the Champions League Twenty20 (CLT20) 2014. Hurricanes had to chase a steep target of 185 runs and they chased it down with the help of two blistering knocks from Ben Dunk and Aiden Blizzard.

Dunk helped the Hurricanes to go off to a flier and he scored 58 runs from just 35 balls. Later, Blizzard took the charge and helped his side to go over the line with an unbeaten score of 78 from just 48 balls, reported the official website of Champions League Twenty20. Read the match report here

Dunk said, “It was a pretty special innings from Aiden (Blizzard) there. He came at a crucial juncture in the middle overs and got himself in. It was a nice wicket to bat on, but you still have to play yourself in. He did that, thought things through, ran well between the wickets and then there was some really clean striking at the end against quality bowlers. This is a great win for all the boys and we have now got some great momentum going forward.”

When asked about his experience with the Mumbai Indians, he said, “I had a great stint here with the Mumbai Indians and I learned a lot from that. Guys like Rohit Sharma, Harbhajan Singh and Kieron Pollard helped me a long way with my batting and gave me a very good idea about batting on Indian wickets. I hope I can carry on like this and keep getting the Hurricanes off to good starts.”

He further added, “It was extremely important. I had never faced such pressure before I played for MI. They have, perhaps, the biggest fan following of all the IPL teams. It was a completely new experience for me, playing in front of those loud crowds and handling that kind of pressure while remaining focused on my game.” 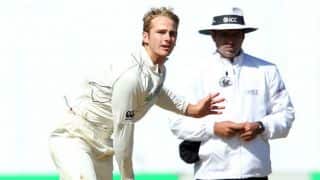