CHennai Super Kings are 26 for one chasing 181 to win the Champions League T20 (CLT20) 2014 against Kolkata Knight Riders in the final at Bangalore.

Pat Cummins had got Dwayne Smith in the first boundaries after he was hit for two fours. And in the second over, Brendon McCullum managed to get a four. In the third over, Cummins was hit for a four through the wide long-of region. Click here for the live blog of the match

Earlier, Chennai Super Kings skipper MS Dhoni won the toss and chose to bowl first. Chennai were playing an unchanged side. On the other hand, Kolkata were forced to bring in Pat Cummins in place of the suspended ace Sunil Narine. Gautam Gambhir’s 80 helped Kolkata put up 180 for six. And, Pawan Negi took five for 22. 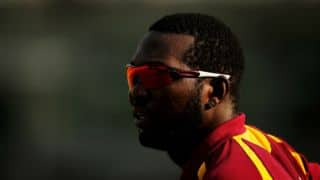