Under Arthur, Pakistan crashed out of the ICC Cricket World Cup 2019 without reaching the semi-finals, finishing fifth on the table table.

As per unverified sources, Pakistan coach Mickey Arthur has expressed his desire to extend his contract with the team for two years, amidst the rumors that he is also interested in coaching the England team, whose coach Trevor Bayliss is set to step down after The Ashes 2019.

Cricket website, cricketpakistan.com.pk was the first to reported the story, which was picked by the Indian media crediting the Pakistan-based website. However the original story does not quote anybody in the know how from Pakistan Cricket Board nor does it substantiate the claim in any manner whatsoever, same goes for the reports published in the Indian media. ALSO READ: Mickey Arthur has contributed nothing to Pakistan cricket team: Abdul Qadir

Under Arthur, Pakistan crashed out of the ICC Cricket World Cup 2019 without reaching the semi-finals, finishing fifth on the table table. Pakistan won a total of five games in the tournament, including a surprise win over eventual winner England and rallied in the fag end of the tournament with four consecutive wins, but failed to qualify for the semi-finals. ALSO READ: After World Cup disappointment, PCB contemplate split captaincy, coaching

Pakistan had won the ICC Champions Trophy in 2017, beating India, and claimed the top spot in the ICC T20 rankings, under Arthur, who joined the team in 2016. But lack of results in Test and ODIs, after the Champion Trophy win, has put Arthur’s job under the scanner.

With Bayliss moving out, England’s coaching job is most sought after with the likes of Ottis Gibson, who lost the South African coach’s job yesterday, and former India coach Gary Kirsten also in the fray for the role.

Earlier, BBC had reported that England and Wales Cricket Board director Ashley Giles had informally sounded out candidates, including Arthur. 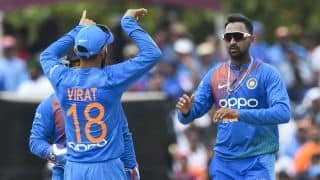