Rajasthan Royals produced an all-round show as they spanked Kings XI Punjab by 43 runs to snap their four-match losing streak in the Indian Premier League. 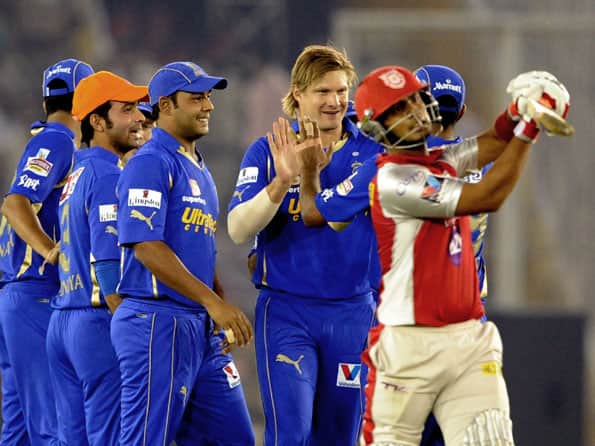 Rajasthan players celebrate the fall of a Punjab wicket AFP

Rajasthan Royals produced an all-round show as they spanked Kings XI Punjab by 43 runs to snap their four-match losing streak in the Indian Premier League.

With this win, KXIP are placed sixth in the IPL Points Table.

Electing to bat, Rajasthan posted a challenging 177 for six with all their top-order batsmen, barring Ajinkya Rahane, contributing and then restricted KXIP to 134 for eight at the PCA Stadium on which the ball came nicely on to the bat.

Chasing 178 for a win, KXIP were in the game only for a brief while when opener Shaun Marsh (34) was going great guns with some lusty hits but once he was out in the ninth over it was all over for the home side as they lost wickets at regular intervals.

The match was as good as over by the 15th over when KXIP were 97 for five and the asking rate had shot up 16 an over.

KXIP were on the backfoot early with opener Mandeep Singh falling to Watson in the second over as his pull shot went straight to mid-on fielder Siddarth Trivedi.

Marsh then milked Ankeet Chavan 18 runs in the seventh over as he hit the bowler for three fours and a six to give the home side hope for a win.

But, just after that big over came the blow as captain David Hussey perished while going for a pull shot only to find a running Brad Hodge taking a good catch as KXIP were reduced to 55 for three in the eighth over.

The home side slumped to further trouble as Marsh followed his captain to the dressing room in the next over as he was cleanbowled by Botha.

By the halfway mark, KXIP were in dire straits at 65 for four and the asking rate shot past 11 an over. Boundaries were needed but they were not coming.

Azhar Mahmood (24) and debutant Gurkeerat Singh (23) tried hard for boundaries but to no avail. The former perished while trying for big shots, cleanbowled by a slow delivery from Binny as KXIP were reduced to 97 for five at the end of 15th over, needing 81 runs for a win.

Rajasthan could have shut out the match sooner rather than later but for their butter-fingered fielders as the visitors dropped at least three catches.

But, the home side could not capitalise on them. Rather, their run chase was all over as the asking rate shot past 16 an over by the end of the 15th over and with half of their batsmen gone.

By the end of the 17th over, the asking rate had gone past 20 an over as Gurkeerat, Piyush Chawla (5) and Rayan Harris (3) could not give a fight as the home side fell short by a whopping 43 runs.

For KXIP, Australian pacer Ryan Harris scalped four wickets for 34 runs while leg-spinner Piyush Chawla took two wickets for 38. All the KXIP bowlers went for runs but they came back strongly in the second part of the innings to restrict Rajasthan to 177 for six.

Watson was the most aggressive of the Rajasthan batsman as he hit four fours and two sixes while Dravid, who hit eight four in his 39-ball innings, held one end initially before he was out in the 14th over.

However, the visitors quickly put the tournament’s top run getter’s loss behind them as Watson cut loose with Dravid also in great touch.

When Harris was back to bowl his second over, Dravid hit three consecutive boundaries of him followed by two hits to the fence of Praveen Kumar and another one from Watson.

Both batsmen hit some lusty shots of medium pacer Praveen Kumar, who gave away just eight runs in the previous match.

Medium pacer Parvinder Awana also came under heavy fire from Watson who hit him two boundaries and a six when the bowler was brought in the sixth over in which he gave away 19 runs.

Dravid and Watson weaved a 69-run partnership for the second wicket before the Australian fell to Chawla in the eighth with Harris making a valiant diving effort at long off to take the catch.

After Watson’s fall, left-handed Menaria walked in and Royals reached 100 runs in the 12th over.

Dravid was caught by Awana off Harris in the 14th over and Menaria followed soon, giving a catch to Gurkeerat Singh off Piyush Chawla.

Hodge and Johan Botha (not out 14) batted brilliantly and they punished Mahmood and Harris. Hodge, after hitting a six and a four off Harris in the final over, fell to the same bowler.

IPL 2012: Pune Warriors penalised for slow over rate in clash against KKR