Prithvi says that expectations will always be there and one has to to take it as a challenge. He reckons that he needs to be consistent to make the top grade

Prithvi Shaw played a good knock of 136 runs in the first Youth Test against South Africa ‘A’ being played in Bengaluru.

Shaw made 62 against the England lions in the only youth Test that India ‘A’ played against England Lions at Worcester last month. The England Lions attack included Sam Curran who troubled the Indian batsmen with his swing in the first innings of the Edgbaston Test. He also scored 188 against the West Indies A side in the first youth Test against them at Beckenham. There has been a buzz created around him being included for the England tour what with the failure of Indian batsmen apart from Virat Kohli against the moving ball in the Edgbaston Test.

The Mumbaikar might be familiar with that massive level of expectation on him. But for Shaw, it has a motivational effect on him. “People’s expectations are a challenge for me. People will say Prithvi has scored a 50 and now he should score 100. If you want to play for national team you need to have that consistency, score hundreds. So I don’t really worry about what outside people are saying as I try to focus on every game that I play,” said Prithvi, who combined with Mayank Agarwal (220*) to take India ‘A’ to 411 for two at close on day two of the four-day game.

Shaw comes from a long line of the renowned Mumbai school of batting. However, he is a bit of an exception to it much like the little master Sachin Tendulkar as he is a naturally attacking batsman who believes in backing himself for playing the shots. “I started my career as an attacking player, even from the school level. I love hitting the ball. So, I am continuing it whichever level I play Under-19, India ‘A’, Ranji Trophy. This method is paying off for me and I don’t want to change my game by going slow,” the young batsman reckoned.

Shaw combined with Mayank Agarwal to add 277 runs for the first wicket in 58.5 overs to lend solidity to Indian batting on day 2 in the first Youth Test against South Africa ‘A’. 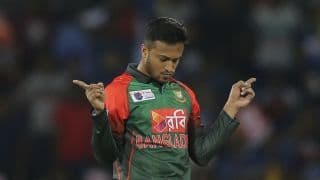