Shivnarine Chanderpaul has agreed a one-year contract, while 31-year-old Dane Vilas has signed a two-year deal with Lancashire.

Londres: West Indies great Shivnarine Chanderpaul is to return to Lancashire at the age of 42, the English county announced Friday. The Manchester-based club have signed both Chanderpaul and South Africa wicket-keeper/batsman Dane Vilas in a bid to bolster their top order during the upcoming 2017 English season. Only Brian Lara has scored more Test runs for the West Indies than Guyana star Chanderpaul who scored 11,867 runs and 30 centuries in 164 matches. He has agreed a one-year contract, while 31-year-old Vilas has signed a two-year deal with Lancashire. Both players have joined Lancashire as non-overseas players on ‘Kolpak’ contracts, a move which effectively ends Vilas’s hopes of playing for South Africa again in the immediate future, with Chanderpaul having already retired from international duty.

Lancashire, seventh in the First Division of England’s first-class County Championship last term, will look to their new duo to help fill the gap left by the departure from Old Trafford in recent seasons of South Africa’s Ashwell Prince and Alviro Petersen. Prince retired in 2015 while Petersen was given a two-year ban by Cricket South Africa in December for attempting to cover-up a match-fixing scandal. Gritty left-hander Chanderpaul previously played for Lancashire in 2010, scoring two hundreds and five fifties in eight first-class matches for the Red Rose county.

“I can t wait to return back to Lancashire this summer. I thoroughly enjoyed playing for the club in 2010,” said Chanderpaul in a club statement. “I’m looking forward to passing on some of my experience to the younger players in the squad.” Lancashire coach Glen Chapple added: “We’re thrilled to be able to bring Shivnarine back to Lancashire. He knows what it takes to be successful and there is no doubt that he will have a positive effect on our squad.”

Vilas, 31, played the last of his six Tests against England in January 2016. But the emergence of Quinton de Kock has limited his international opportunities. “Signing a player of Dane’s undoubted calibre and experience is a great boost,” said Chapple.”He has an excellent record in first-class cricket and is a very good wicket-keeper.”

The Kolpak ruling came into force in 2003 when the European Court of Justice ruled anyone with a work permit from a country which has an associate trading agreement with the European Union had the same rights as a European worker. Both South Africa and several Caribbean nations have such trading agreements.

The ruling originally related to Slovakian handball player Maros Kolpak who was released from his German club because of a quota on non-EU players. He claimed it was unfair and the court ruled in his favour. A player becomes eligible for a Kolpak deal when he gives up the right to play for his country, and is not classed as an overseas-player signing.

With Britain set to leave the European Union, Kolpak deals for cricketers may not be on offer for much longer and Vilas is the latest South Africa international to sign such a contract for the 2017 season. The low value of the Rand and South Africa’s transformation targets, which effectively mean that a maximum of five white players can appear in a team, have also been cited as reasons for the talent drain. 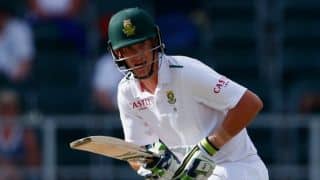