Jamaica Tallawahs batsman Andre Russell hit a four and six of the last two balls to seal a thrilling six-wicket win over Guyana Amazon Warriors in the Caribbean Premier League 2014 at Kingston, Jamaica. Chasing 138, Russell hit an unbeaten 58 in only 24 balls with three fours and six sixes. With this win, the Tallawahs are second on the points table behind Trinidad & Tobago Red Steel.

With Chris Gayle in the ranks, a chase of 138 was going to be tricky on a slow wicket. The Warriors put up a disciplined bowling performance in the low-scoring thriller. Having won the toss, the Tallawahs decided to field in their home match. Daniel Vettori struck first removing fellow Kiwi player Martin Guptill for 15. The bowlers kept a tight leash and never allowed the Warriors batsmen to score freely. By the 13th over, Warriors had lost half their batsmen with only 77 on board.

After a 34 from Lendl Simmons at the top, it was James Neesham who anchored the innings and took them to a respectable score. Vettori was miserly with one for 16 in his four overs whereas, Jerome Taylor broke the middle-order with three for 14. In response, The Tallawahs moved cautiously and things looked tough when they lost their skipper Chris Gayle for 22. They needed 76 in 40 balls when Owais Shah and Russell came together. While Shah held on to one end, he left the aggressive Russell to have a go at the bowlers.

The first three balls yielded only a single thanks to a leg-bye. A wide and a single followed making it 10 from two balls from th Tallwahs to win and Russell on strike. James Neesham feeded Russell with a full-toss and it was carved over covers for four. Neesham missed his length on the last ball and Russell hoicked it over mid-wicket for six.

Guyana have been on the wrong side of such thrillers once again in this tournament. Two matches earlier, Beaton was hit for a last-ball six by Trinidad & Tobago batsman Darren Bravo. 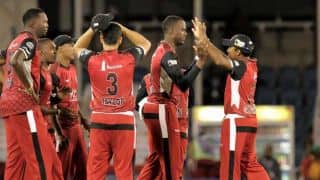