Catch Live Updates of the CPL 2014 final between Barbados and Guyana here.

After the match was heading to a titanic finish, rain has called off play and Barbados Tridents have won the match. Guyana Amazon Warriors were 8 runs short after the Duckworth/Lewis calculations were made. Quite a shame considering how the match was poised at the final rain break.

There is a rain delay. It shouldn’t take long for play to resume though.

BAR 56/2 | Overs 7
D Smith 33(28), S Malik 16(11)
The first ball from Sunil Narine is wrapped on Smith’s pads as he attempts a pull shot. Its a good shout but the ball marginally beats the off-stump. Narine bowls two carrom balls that leaves Smith beaten all ends up but the opener has the final say in the over’s battle by bludgeoning the ball over the cow cover boundary for a huge six.
BAR 48/2 | Overs 6
D Smith 27(24), S Malik 15(9)
Permaul continues and the ball is lofted to the long on boundary. One bounce and into the ropes and Malk follows that shot with an exquisite plod down the ground and finished the powerplay overs by expertly cutting the ball past the off-side field and its the third boundary of the over.
BAR 34/2 | Overs 5
D Smith 27(24), S Malik 1(3)
The young pacer Ronsford Beaton has come on to bowl and Dwayne Smith’s on Viv Richards mode — hoicking a one-legged six over deep backward-square. He follows that by smashing a slightly shortish delivery down the ground for a big six over the sightscreen. That was raw, unadulterated power from the opener. He drifts one down the leg side and the ball beats the short fine leg fielder for another boundary and the last ball is a couple, which is worked down the leg side.
BAR 17/2 | Overs 4
D Smith 11(18), S Malik 1(3)
Permaul continues and a short-arm jab from the powerful Smith on the leg side gives us the first six of the match. Thats a big one. The batsmen rotate the strike and are settling in.
BAR 8/2 | Overs 3
D Smith 3(14), S Malik 0(1)
Jason Holder was sent in as a pinch hitter and the plan has failed. Why? The answer is Santokie. The left-armer bowls a peach of a slow yorker that beats the statuesque Holder all ends up and cleans up his off-stump. This brings former Pakistan captain Shoaib Malik to the crease and another yorker from Santokie wraps Malik on his pads before it hits the bat. There is a loud appeal but the umpire turns it down.
OUT! J Holder b Santokie 0(1)
BAR 6/1 | Overs 2
D Smith 2(10), J Holder 0(0)
The first ball of the final is a loosener by Santokie. The left-armer darts it into the pads and its a boundary. The fifth ball is yeilds the first wicket of the match as Perkins slices the ball past gully. Hafeez takes a safe catch. The second over is a tidy, disciplined one from Veerasamy Permaul.
W Perkins c Hafeez b Santokie

Hello and welcome to CricketCountry’s coverage of the Carribean Premier League (CPL) final between Barbados Tridents and Guyana Amazon Warriors. Barbados Tridents have been the team of the tournament so far and certainly start the final as the favourites. However, it should not be forgotten that Guyana are the defending champions and the fact that they reached the final in some style. Lendl Simmons and Martin Guptill’s astounding onslaught brought the boudndary lavers on their feet and recorded a 10-wicket win. Barbados have a team packed with seasoned Internationals like Shoaib Malik, Jeevan Mendis and one of T20 cricket’s favourite sons, Kieron Pollard. Guyana, on the other hand have the know-how of a CPL final and rely heavily on their young West Indian bridage which comprises of players like Simmons and the wily medium-pacer Krishmar Santokie and the prolific Sunil Narine. Hi I am R Vishal and I will be bringing you live updates of the match. It should be a tense, evenly contested match. Join in for the fun maan! Ravichandran Ashwin breaks his overseas drought; chance for him to outshine Ravindra Jadeja 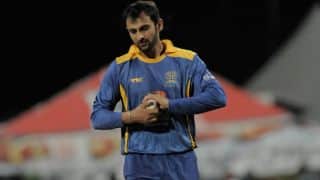