A fine fifty from Andre McCarthy and impeccable bowling display from Mohammad Sami handed Jamaican Tallawahs their first victory in CPL 2017. Chasing 155, Barbados Tridents were off to poor start as they were five down for 52. Kieron Pollard was the only top-scorer with his quickfire 33-ball 62. Pakistan s veteran bowler Sami ran through the batting line-up early, dismissing Dwayne Smith and Nicholas Pooran for 20 and nought respectively. To add to the wounds, a direct hit to run out of Akeal Hosain left Tridents in shackles. Sami s teammate Imad Wasim also got a crucial wicket of Kane Williamson for 7 to leave Tridents in deep trouble. CPL 2017: Squads and player details

Pollard was the only one to provide some hope to Tridents of winning the match. In Krishmar Santokie s third over, Pollard smashed him for two sixes. He did not spare the Bangladesh all-rounder Shakib Al Hasan, following with two more sixes and a boundary. Pollard s big-hitting skills brought down the equation to 25 off 12. However, Sami continued his rampage by picking the priced scalps of Wahab Riaz and Pollard in the 19th over. Tridents required 22 of the final over. Santokie bundled Tridents by claiming the wicket of Ravi Rampaul off the final ball of the innings. Sami’s figures read 4 for 12. Earlier, Tallawahs displayed top-notch show with the bat. Lendl Simmons and McCarthy s partnership set the tone.

Simmons’ 30 coupled with McCarthy s volley of shots upped the ante. Shakib might not have had a great day at office with the ball, but his unbeaten 44 set up a competitive total for the opposition.

Amongst the Tridents bowlers, Riaz was the best, picking of 3 for 32. Tridents will next play against St Lucia Stars, while Tallawahs will play Trinbago Knight Riders. 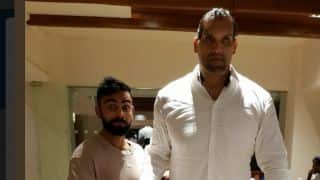