The West Indian batsman walloped a breathtaking 94 off 36 balls and pulled off stunning chase of 213.

If the other day, defending champions Trinbago Knight Riders were at the receiving end of Andre Russell s demolition derby, Thursday night it was their turn to step of the accelerator. Leading the way was the electric Darren Bravo, who dished out an assault that outdid St. Lucia Stars’ best CPL performance with the bat. The West Indian walloped a breathtaking 94 off 36 balls and pulled off stunning chase of 213.

In a match that saw a record total of 34 sixes being hit, St. Lucia, batting first, were led well by their top order three batsmen getting to half-centuries. But as it turned out, it wasn t enough to stop Bravo from exhibiting his merciless hitting. Bravo was aided by another T20 specialist, Brendon McCullum, and together they forged a 137-run stand to bring Knight Riders back from the dead.

For the Stars, David Warner regained some form with a 55-ball 72. With Andre Fletcher falling in the sixth over, Warner and Rahkeem Cornwall took their team forward with a 79-run partnership. Cornwall bludgeoned his way to a half-century off 25 balls. His dismissal for 53 provided no respite to Knight Riders, as the proceedings were then take care of by Stars skipper Kieron Pollard. Pollard took off from where Cornwall left and stroked his way to an even quicker, 18-ball 50.

Pollard faced the final 17 off 18 balls, and even as Warner departed, the Trinidadian was took 61 off the last three overs to propel his side to their highest CPL score. But once it was their turn to make amends with the ball, the wheels just came off. Cornwall, this time with the ball, began well, knocking over Knight Riders openers Sunil Narine and Chris Lynn, but in Colin Munro, McCullum found an able ally and the two rebuilt with a stand of 51.

Munro was smartly held at deep square-leg, which brought out Bravo. With the asking rate climbing and Knight Riders requiring 85 off 30, the 16th over bowled by Pollard is where things changed. The first two deliveries were ride, the next four went for six. Suddenly, 85 became 53.

McCullum was unable to see the job through, edging behind off Mitchell McClenaghan. But Bravo was there at the end, and off Pollard’s final over, Bravo sent him down for five sixes. Denesh Ramdin smashed the fifth ball of the final over and sealed a fascinating win. 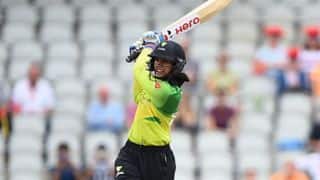